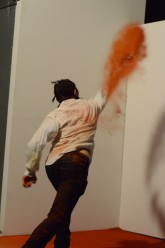 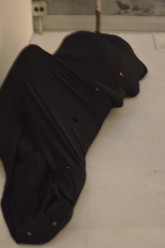 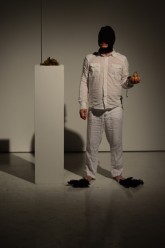 PROTEST AGAINST THE VOID
a performance by TUAN MAMI (VIETNAM)

TUAN MAMI, living and working in HANOI, VIETNAM, has been recognized for his provocative public performances, both within ASIA and EUROPE. he was included in the critically acclaimed exhibition SKYLINE WITH FLYING PEOPLE, the JAPAN FOUNDATION in HANOI (2012). in the US, MAMI exhibited  “24 HOURS TENSION” at PØST SPACE and “FREEDOM is the MOTORBIKE” at LBCC GALLERY, both in LOS ANGELES. he is a recipient of numerous residencies, including SAN-ART LABORATORY in HO CHI MINH CITY, VIETNAM; HOYOONG PERFORMING ARTS CENTER in SOUTH KOREA; TOKYO WONDER SITE, TOKYO, JAPAN; and the ASIA-EUROPE ART CAMP 2010, SHANGHAI, CHINA. he recently participated in number of international art exhibitions, including the PHARMACIDE PROJECT, traveling between LAOS, VIETNAM, CAMBODIA, and FRANCE (2012); A CROSSROADS at the INSTITUTE of CONTEMPORARY ART SINGAPORE (2011); UTOPIA, JAPAN FOUNDATION, HANOI, 2012; CELEBRATION OF OUR MOMENT and FAREWELL PARTY, HALLE 6, MUNICH, 2011; and WHAT IS MOM WAITING FOR?, HOOYONG ART CENTER, SOUTH KOREA, 2011.

as an artist, my interest lies in engaging in ongoing experiments as means to creating and exploring new conceptions of interaction and exchange. my works often present a view in form like two sides of a coin; one, analyzing the condition of our encounters with each other, which often is a critique of the present state of society; the other, responding to and attempting to shift or change current forms of relation. my work deals with questions about life, meaning and social interactions between people. I re-construct a situation into which I engage people or objects from particular reality to enter and involve with me in a social process. “art is like a game” which transforms one thing into another whether it deals with a big issue or a neglected one. what is life? what is art? what is the artwork? who is the artist? … I consider doing art as a way of challenging perception, to work with and follow the fast changes in life. I challenge myself to see other sides of things and ﬁnd relationships between life and art. my works are site-speciﬁc, and re-constructional concept. I’m inﬂuenced by reality and I question it: what should we think to ﬁt ourselves into the whole? I want to reconstruct a complex correlation between human desire and natural resource.