MAJESTY of the FLESH: ROCIO BOLIVER 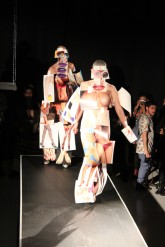 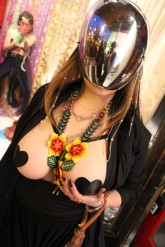 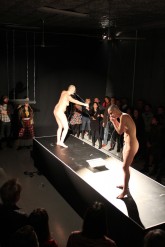 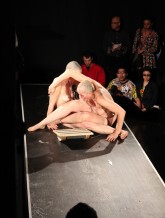 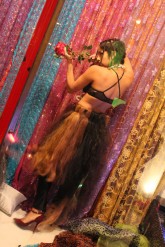 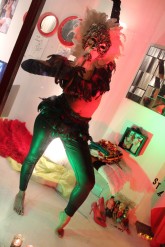 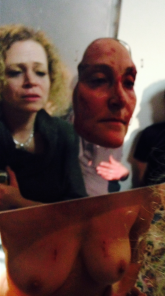 MAJESTY of the FLESH: ROCIO BOLIVER

and a performance in the windows from 7:30 to 8:30PM by
LUCHA CLARA (MEXICO/US) called ANTISTAR
with CHRISTIAN CRUZ a.k.a. MEÑINA & ALIAJHANE

MAJESTY OF FLESH is a series of exhibitions and discussions initiated by DEFIBRILLATOR to examine extreme uses of the body as site, research, and practice. through this project we aim to build appreciation and awareness regarding the underrepresented genre of body modification within time-based art. SUKA OFF (POLAND) kicked off the series in OCTOBER 2013 followed by RON ATHEY in JANUARY 2014. BOLIVER completes the series with BALANCING ON THE EDGE/AGE

BOLIVER studied performance art at the TISCH SCHOOL for the ARTS, NEW YORK UNIVERSITY, with RICHARD SCHECHNER; and HISTORY of PERFORMANCE at ARTS PLASTIQUES DU CÉGEP DE L’ABITIBI, QUEBEC, CANADA. with a background in television and theatre, BOLIVER has also worked in music, literature, and academia. from 1998 until 2008 she worked alongside the “electropanic” music ensemble BINARIA, combining performance and electronic music. in 2000 they edited the interactive CD “binaria 13”. their acts include raves, festivals, fairs, and activity in the GOTH art scene, especially in the NATIONAL SADOMASOCHIST FESTIVAL. in 1992 she began her performance career by reading her porno-erotic texts. since then her work has been presented in festivals in EUROPE, ASIA, and NORTH and SOUTH AMERICA.

BOLIVER was awarded the SCHOLARSHIP PROMOTION PROJECTS and JOINT VENTURES FONCA CULTURAL GRANT by the NATIONAL COUNCIL for CULTURE and the ARTS. she has exhibited work in the museums EX TERESA ARTE ACTUAL -INBA and EL MUSEO EXPERIMENTAL EL ECO -UNAM. in 2000 she established “MEN’S INTERNATIONAL DAY” at the POLITICAL SCIENCE FACULTY of the MEXICAN NATIONAL UNIVERSITY. her performances have been seen on MEXICAN TV channels such as; CANAL 22, CANAL 40 and TV AZTECA. she published her first book, SABER ESCOGER, and frequently contributes to alternative and sexuality magazines. she has taught performance workshops in cities like LISBON, NEW YORK, BARCELONA and MEXICO CITY. her teaching methodology is outlined in the book “PEDAGOGY OF PERFORMANCE” by VALENTIN TORRENS, SPANISH edition, 2008.

BEGOÑA GRANDE (SPAIN) searches for the freedom of the soul through performance and poetry. she fights for the survival of art as a medicine. her work is a continuous mutation, a paralysis between time and space, a transparent reflection. forced to have a degree in the university, she started studying communication. her concern for finding something beyond, for breaking the schemes established by society, led her to discover the immense emptiness of the humanoid system. after several years where fear and loneliness were her best colleagues, she decided to begin working with the video performance format. one of her works, “EMPTINESS” was selected as the most representative video of bizarre art in the short film festival “CAOSTICA V”, in BILBAO. since then, she has worked with national and international artists such as MARCEL.LI ANTUNEZ, ROCIO BOLIVER, CUCO SUAREZ, and in places like MEXICO, PORTUGAL, MOROCCO, POLAND, or BASQUE COUNTRY. with a scholarship by the CENTER of ARTISTIC RESEARCH LADINES, she ventured to experiment with performance in its purest state. nowadays she investigates the modified states of consciousness, working with ALTER CONSCIENS, an association devoted to the research and social outreach of transdisciplinary activities on the border between performing arts, new technologies and the diverse states of consciousness.

LUCHA CLARA (MEXICO/US) has a hybrid identity stemming from her cultural upbringing in MEXICO CITY and the UNITED STATES. she draws upon cliché, kitsch, MEXICAN folklore and her love of sensuality. CLARA fetishizes and gestures toward not only cultural objects, but also herself as a cultural object. through seduction and humor, she struggles to navigate the various roles of her cultural upbringing and the ones set upon her by society.