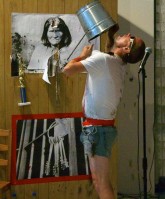 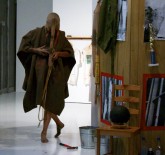 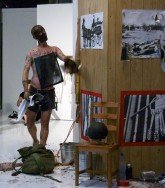 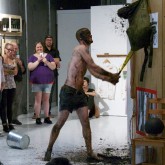 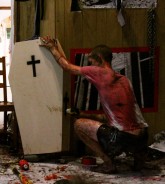 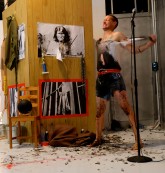 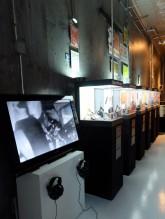 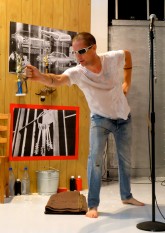 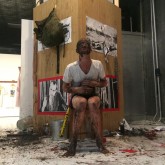 DEFIBRILLATOR GALLERY
is proud to present

ABOVE SNAKES
a solo exhibition by
JAMIE McMURRY

in an extensive showing of installations and materials from his most recent conceptual art projects and performances, JAMIE McMURRY (LOS ANGELES) brings his solo exhibit, ABOVE SNAKES, to CHICAGO’S DEFIBRILLATOR GALLERY with an opening and performance FRIDAY, SEPTEMBER 5th from 8PM-11PM.

the live performance, ANGEL LUST, will take place at the opening at 9:00PM.

documentation and objects will be on display from the INTELLIGENT DESIGN series commissioned by the FRANKLIN FURNACE FUND, photos from several street actions called COLOR THEORY, and the personal effects of deceased accident or homicide victims that MCMURRY has been collecting for a project entitled OBJECT WITNESS..

JAMIE McMURRY has been an active organizer, educator and artist in the fields of performance, installation, video and conceptual art for more than 20 years. originally from YAKIMA, WASHINGTON. he currently resides in LOS ANGELES, CALIFORNIA. MCMURRY’S work has most recently been exhibited at the UNIVERSITY of HILDESHEIM, GERMANY – 2013; BOSTON CENTER for the ARTS – 2013 and 2014; MIAMI INTERNATIONAL PERFORMANCE ART FESTIVAL – 2013; NATIONAL GALLERY of ART, SOPOT, POLAND – 2013; HUMAN RESOURCES, LOS ANGELES – 2012; EXISTENCE FESTIVAL, BRISBANE – 2012.

McMURRY has taught performance, video and sound as a visiting artist faculty member at the SCHOOL of THE MUSEUM of FINE ARTS, BOSTON (2003-2005) and at ART CENTER COLLEGE of DESIGN, PASADENA (2007-2009). most recently he has conducted workshops and artist talks at THE SCHOOL of the ART INSTITUTE of CHICAGO; NATIONAL REVIEW of LIVE ART, SCOTLAND; UNIVERSITY of HILDESHEIM, GERMANY; UNIVERSITY of VINA DEL MAR, CHILE. he has recently presented and published writing at THE COLLEGE ART ASSOCIATION 2014, in THE TOTAL ART JOURNAL and FOR FRENCH ART MAGAZINE DOCKS. in 2014 he was a FRANKLIN FURNACE FUND RECIPIENT and FONDART, CHILE grantee.

this performance is made possible in part by support from the FRANKLIN FURNACE FUND.