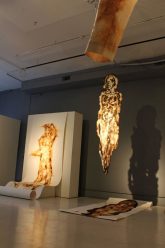 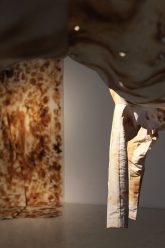 Continuum captures more than a decade of artistic exploration by Igor Josifov who uses fire as a mark-making tool. The results are celebrated in films, installations, live performances, works on paper, works on linen, and glass and ceramic sculptures. The process is a performance. Josifov has transformed the Defibrillator garage into a temporary studio for nine days during which time he will create burned works and add them to an evolving large-scale installation in the main space. Witness the artist at work during gallery hours  from 20-29 APRIL | 10a-8p | free.

photos courtesy of the artist

Igor Josifov (Macedonia, b. 1986) is a visual and performance artist who exhibits and performs internationally. In 2007, he held his first solo exhibition, Art In Search Of The ‘I’, in San Francisco. Between 2008 to 2010, Josifov had numerous exhibitions in San Francisco, New York, and Chicago where he presented projects such as Art Interrupted (2008), Mental Prison (2009), and Being you, uses me (2009). His performance, 2-Dimensional, was featured at the opening of the Modern Wing at The Art Institute of Chicago as well as the Maraya Art Center in Sharjah, United Arab Emirates. Co-founder with Marina Abramović of the Marina Abramović Institute in San Francisco, Josifov participated in the exhibition Marina Abramović: The Artist Is Present at MoMA New York in 2010. In 2012, the National Museum of Contemporary Arts in Skopje, Macedonia, dedicated a solo exhibition to the artist: Igor Josifov – selected works (2007-2012).

Presented as a performative installation that viewers experience with all their senses, Continuum mirrors the world through fire and represents both liberation and unity simultaneously. The abstract figurative images evoke an inescapable awareness that a fire is within us. Continuum is a commitment to a process that constantly nurtures growth and inspires truth.