Defibrillator Gallery is a proud participant in the citywide IN>TIME Performance Festival. The 2019 edition will focus on histories and archives, especially as they relate to performance art and other ephemeral practices. Embodying this idea, IN>TIME curators invited San Francisco-based Ryan Tacata to create a response to a work by the influential collective Goat Island Performance Group – coinciding with their retrospective at the Chicago Cultural Center. Defibrillator invited local artist Po’Chop|Jenn Freeman and Boston-based Marilyn Arsem to be part of the program. Freeman will perform a movement piece mining her family’s history on the south side of Chicago. Arsem, an influential figure in the history of performance art, is the subject of a forthcoming book written and edited by Jennie Klein and Natalie S. Loveless who will be reading excerpts as part of the program.

IN>TIME FESTIVAL [www.in-time-performance.org] is a triennial performance event encompassing a month of performances, presentations, and exhibitions at venues throughout the city from local, national, and international artists. IN>TIME 2019 is working in coordination with an upcoming exhibition at the Chicago Cultural Center: goat island archive – we have discovered the performance by making it. As with previous years, IN>TIME works with a wide range of local venues across Chicago’s neighborhoods including 6018North; Comfort Station; Graham Foundation; High Concept Labs; Hyde Park Arts Center; Links Hall; Museum of Contemporary Art; and Sullivan Galleries at the School of the Art Institute of Chicago.

For the 2019 edition of IN>TIME, a selection of artists is paired with a former Goat Island member as mentor to develop a new work. These new performance works will then be presented as part of the Goat Island archive exhibition throughout its duration at the Cultural Center (March 30 to June 23, 2019). Nine artists/collectives will develop responsive performances to the nine works created over the course of Goat Island’s 23-year history, featuring: BADco. (Croatia); Augusto Corrieri (U.K.); hancock and kelly (Germany/U.K.); Ian Hatcher (New York); Vlatka Horvat (U.K.); Judith Leemann (Boston); Erin Manning (Canada); Jefferson Pinder (Chicago); Ryan Tacata (San Francisco); and Robert Walton (Australia). 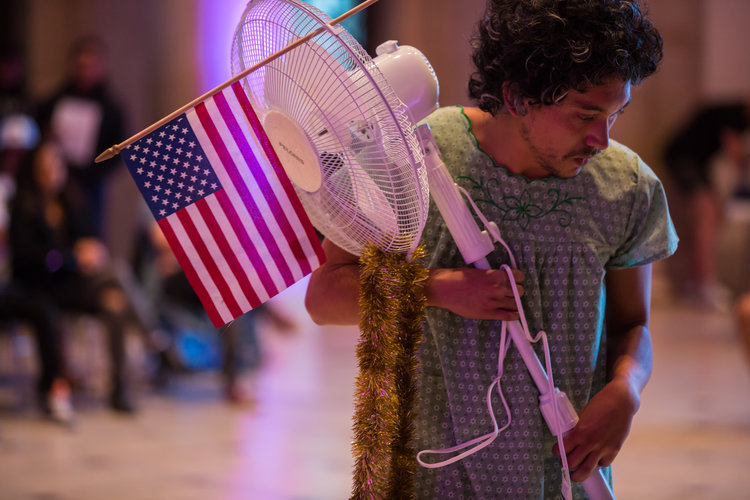 Ryan Tacata | Lola | photo by Quincy Stamper 2017
Ryan Tacata [www.ryan-tacata.com] is a performance maker, educator, and scholar based in San Francisco. His performance projects include Lolas (2017-, a performance installation in honor of Filipino grandmothers, Asian Art Museum); For You, (2016-) with Erika Chong Shuch (a series of dedicated performances for audiences of 12); and dancing in Doggie Hamlet (2015-) by Ann Carlson (a site-specific dance with four human performers, sheep herding dogs, and 30+ sheep).  He is currently writing on ‘the occasion’ with a focus on performance art history and occasional literature. His scholarly and creative work has appeared in Performa, TDR, Performance Research and SFMoMA’s OpenSpace. He is a lecturer in the Immersion in the Arts: Living in Culture (ITALIC) Program at Stanford University.

Tacata’s performance a minor repair. is a work in progress, a missing response, returned to Goat Island Performance Group’s work When Will the September Roses Bloom? Last Night Was Only A Comedy 2004. Based on materials found in the company’s archive, a minor repair. recapitulates the original project’s concern for ‘repair’ by playing within Lin Hixson’s question: “Can we lift the stain from the upholstery; scrap the tar from the rain; unplug the drain; and treat the urine in the wind?” 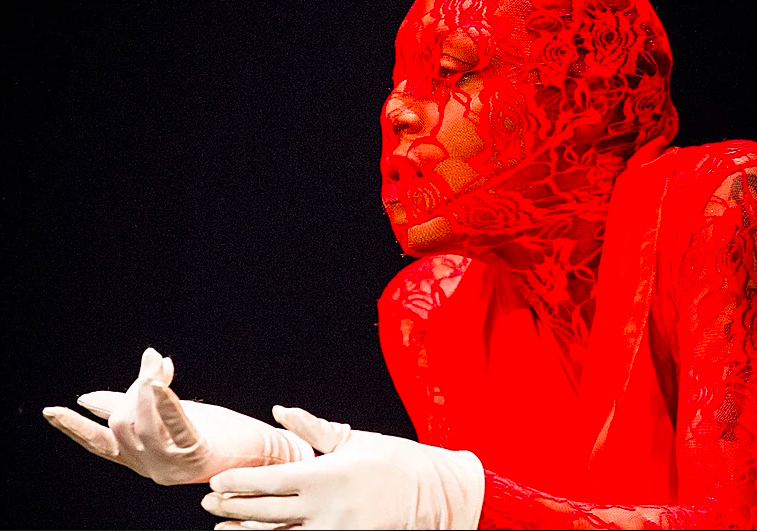 Po’Chop | Jenn Freeman photo by Greg Inda
Po’Chop [www.itspochop.com] a.k.a. Jenn Freeman is a Chicago-based performance artist who uses elements of dance, storytelling, and striptease to create performances and inspire students and collaborators across the country. Po’Chop has performed at the Brooklyn Museum in Brown Girls Burlesque Bodyspeak, and headlined shows in New Orleans, Kansas City, Minneapolis, St. Louis and New York. Po’Chop is an Advisory Board Member for High Concepts Laboratory and a Board Member, Cast Member, and Workshop Leader for Jeezy’s Juke Joint, an all black burlesque revue. Po’Chop performs on Netflix’s Easy (Season 2), appears in music videos for songs by Jamila Woods and Mykele Deville, and is a muse for co-created experimental dance films such as Home | Here. Po’Chop was selected as the recipient of the Chances Dances Mark Aguhar Memorial Grant in 2015, awarded as a 2017 3Arts Make A Wave Artist and was recently selected as a 2018 Chicago Dancemakers Lab Artist.

Po’Chop will perform Dynamite – an exploration into memory and masculinity. It is the re-imagining of traditions. It is finding one’s self within the legacies of those who came before us. 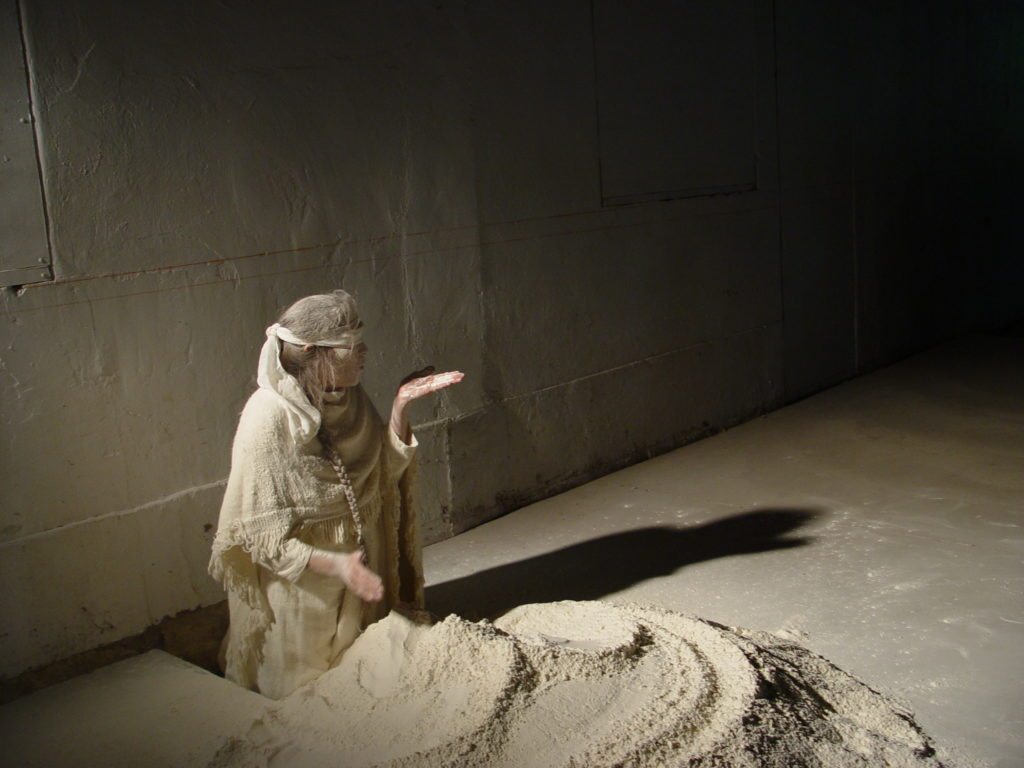 Marilyn Arsem | Forgetting | photo by Sofia De Grenade
Marilyn Arsem [www.marilynarsem.net] has been creating live events since 1975, ranging from solo performances to large scale, site-specific works incorporating installation and performance.  She has presented work in 29 countries in North and South America, Europe, the Middle East, and Asia. Recent awards include the 2015 Maud Morgan Prize of the Museum of Fine Arts, Boston, a 2017 Massachusetts Cultural Council Fellowship, and a 2017 City of Boston Artist Fellowship, and Live Arts Boston project grants.  Many of her works are durational in nature, and minimal in actions and materials. Arsem has often focused on creating works in response to specific sites, engaging with the immediate landscape and materiality of the location, its history, use or politics. Sites have included a former Cold War missile base in the United States, a 15th century Turkish bath in Macedonia, an aluminum factory in Argentina, the grounds of an abandoned tuberculosis sanatorium in Poland, and the site of the Spanish landing in the Philippines.  Arsem is a member of Mobius, Inc., an interdisciplinary collaborative of artists which she founded in 1975. She taught at the School of the Museum of Fine Arts, Boston for 27 years, establishing one of the most extensive programs internationally in visually-based performance art. She continues to teach performance workshops internationally.

Arsem’s performance for IN>TIME, still. here., draws on two past performances the artist presented at Defibrillator Gallery. Materials and imagery from the prior works will be transformed and built upon to create a new work inspired by the old. Arsem’s statement about still. here. is a list of five prompts:

Jennie Klein [www.jenniekleinperformancewriting.blogspot.com] is an art historian who writes on contemporary art, performance art and the intersection of gender and visual culture. She received her Ph.D. from the University of Southern California in 1998. Dr. Klein is presently completing two book projects. The first, tentatively titled Responding to Site co-edited with Dr. Natalie Loveless under contract with Intellect Press, is an edited collection on the work of performance artist Marilyn Arsem. The second, Assuming the Ecosexual Position, under contract with the University of Minnesota Press, is a compilation of the work and writing of Annie Sprinkle and Elizabeth Stephens. Dr. Klein is Editor of Letters From Linda M. Montano. London: Routledge, 2005 and has also been published in PAJ, Frontiers, Journal of Lesbian Studies, Feminist Studies, N. Paradoxa, ArtPulse,Art Papers, New Art Examiner, Genders, and Afterimage. Dr. Klein teaches courses on contemporary art and theory, performance art and theory, the intersection of gender and art, and serves as the Director of Studies for the Honors Tutorial College at Ohio University.

Natalie S. Loveless [www.loveless.ca] is an associate professor at the University of Alberta, where she teaches in the History of Art, Design and Visual Culture and directs the Research-Creation and Social Justice CoLABoratory (researchcreation.ca). Her forthcoming book with Duke University Press, How to Make Art at the End of the World: A Manifesto for Research-Creation, examines debates surrounding research-creation and its institutionalization, paying particular attention to what it means – and why it matters –  to make and teach art research-creationally in the North American university today. She recently completed New Maternalisms, a project bringing together feminist art practice, theory and curation, and an interdisciplinary collaborative project on global vaccination called Immune Nations that culminated in a high-profile exhibition at the United Nations in Geneva during the 2017 World Health Assembly. Loveless currently co-leads Speculative Energy Futures, a multi-year project that is part of the Just Powers initiative funded by the Future Energy Systems CFREF and a SSHRC Insight grant (justpowers.ca), and, during the 2018-19 academic year, is in residence as a visiting scholar in the Centre for Interdisciplinary Studies in Society and Culture (CISSC), where she is developing a new project, Sensing the Anthropocene: Aesthetic Attunement in an age of Urgency.

Zhou B Art Center is a private non-government funded complex founded in 2004 by the Zhou Brothers in Chicago’s historic Bridgeport neighborhood, Zhou B has a mission to engage in cultural dialogue through contemporary art exhibitions and international programming.