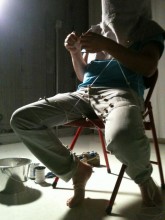 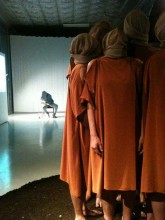 and additional work by

FERNANDO RIBIERO is a performance artist living and working in CURITIBA, a vibrant city in southern BRAZIL. he graduated in visual arts from UNIVERSIDADE TUIUTI do PARANÁ (2002) where he also did his post-graduate work in aesthetics and philosophy of art (2010). his theoretical and practical performance works focus on materials and action. this project has been undertaken with the support of PREFEITURA MUNICIPAL de CURITIBA, FUNDAÇÃO CULTURAL de CURITIBA, FUNDO MUNICIPAL da CULTURA – PROGRAMA de APOIO e INCENTIVO à CULTURA.

CHICAGO performance artists TODD FRUGIA and MARREKESH are a husband/wife duo who operate out of ROOMS GALLERY in PILSEN where they produce monthly performance and video installations. they’re recent work has focused on the development of rules and systems to create ritualistic task oriented performance.

MONICA PANZARINO (born 1979 in new york city) currently lives and works in CHICAGO, ILLINOIS. she recieved an MFA from the SCHOOL OF THE ART INSTITUTE of CHICAGO in 2011. her work in video, sound and performance has exhibited both nationally and internationally. recent venues include the the CHICAGO UNDERGROUND FILM FESTIVAL and the MUSEUM OF CONTEMPORARY PHOTOGRAPHY in CHICAGO ILLINOIS, the 7th BUSAN INTERNATIONAL VIDEO FESTIVAL in BUSAN, SOUTH KOREA and the EUROPEAN MEDIA ART FESTIVAL in OSNABRÜCK, GERMANY. In conjunction with her window installation in the electrodes, MONICA PANZARINO will be interacting with passers-by on the street at the following times: TUESDAY 4.3 @ 6-8pm | WEDNESDAY 4.4 @ 6-8pm | THURSDAY 4.5 @ 8-11pm | FRIDAY 4.6 @ 8-11pm