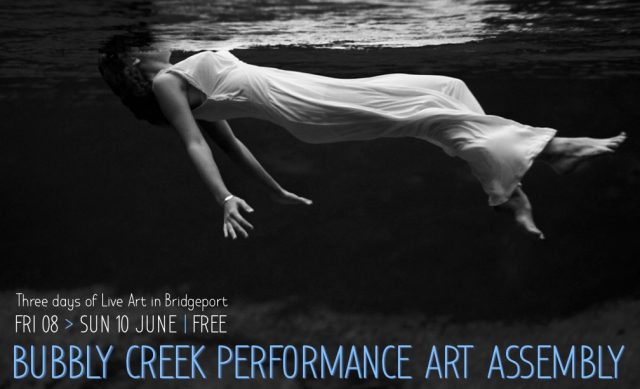 Bubbly Creek Performance Art Assembly is a proud cross-contamination with the In/habit roving art series project: PLANTS & ANIMALS: On Monsters, Cyborgs and Other Hybrid Creatures – a collision of performance, discussion, screening, and broadcasting events focused on themes of hybridity, layered ecologies and practices of inhabiting and interrogating Nature. Through this assembly we ask and examine how we survive together. Hybridity is offered here as artillery against the scourge of centuries old Western binaries. It is an invitation to once again think about the categories of machine/nature/human beyond the limits of the anthropocene, together with queer, feminist, and anti-racist politics. 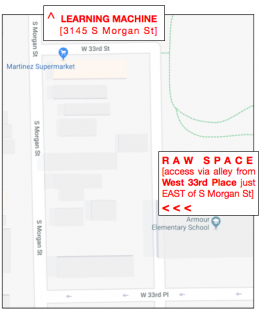 In/habit roving art series is an open platform dedicated to holding space for brilliant weirdos, fostering collaborations between queer, feminist, BIPOC, radical thinkers and artists with various degrees of recognition in the (art) world. Created and curated by LADIDA & SALMON, this multimedia roving art series acts as a trickster platform blurring the lines between the economy of practices in both DIY spaces/politics and institutionalized art spaces. The notion of inhabiting points to politics of space, bodies, dwelling, displacement, borders, taking up space, cohabitation and habits. Each event tackles a specific theme and occurs at a different venue.

THE LEARNING MACHINE is a DIY space in the Bridgeport neighborhood that presents visual art, screenings, discussions, performances, and social practice. The storefront and back garden provide an underground platform for Chicago artists to celebrate, contemplate, and question artistic discourse and innovative modes of display and production.

R A W Space is an alternative exhibition venue in a large garage owned by Zhou B Art Center near the mouth of the alley just east of South Morgan Street at West 33rd Place next to Armour Elementary School. There are no restrooms or running water at this location. Please be respectful of our neighbors.