Gary Winters + Claire Hind [UK] collaborate on live performances for the city and for the studio, gallery or museum. They make Super 8mm film, live studio performance, durational acts, printed artworks and street interventions. They make hybrid personas from the process of ghosting and are influenced by cult cinema, dead icons, eremitic culture and dark emotional ballads. Their work has toured internationally and in 2015 they were in residency at the Defibrillator Gallery Chicago. Projects include: Kong Lear, Dream Yards, Roy of the Dead/Day of the O, Gillygate Sleeps, Five Dead Acts Five Dead Cats, In Dreams You Are Mine and The Heaps.  Gary Winters is also the Co-artistic Director of performance company Lone Twin and Claire Hind is an Associate Professor at York St John University UK.

Gary and Claire will develop a new performance, Lost in a Sea of Glass and Tin, to premier at Defibrillator created during a residency at the gallery. The process for making the performance will take as inspiration the eremitic rituals of the 14th Century English Hermit Richard Rolle, the elegant structure of the 1960’s pop hit Penny Arcade and the duck’s eye view of a handful of movies by David Lynch. Drawing upon the themes of desire, solitude and disruption, Gary and Claire will act upon cross-fertilizations of art forms; the porosity between noiresque cinema and live performance and practice a distortion of gestures for the singing body exploring medieval ritual through the lens of Christopher Roman’s ‘queering the hermit’. Compositional strategies for making a new work will illuminate the distinctiveness that contemporary performance celebrates; the exciting potential of hybridity. The work will be performed to the set condition of 15 lighting states and will include the odd appearance of a fly that says, “I am just a fly.  But let’s not make assumptions about my level of consciousness, just because I land on crap”. 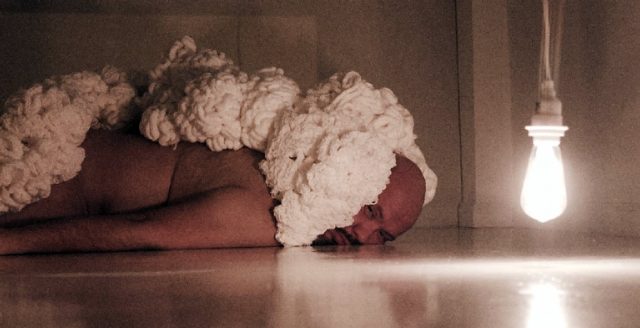 José Santiago Pérez is a Chicago-based artist. He draws on embodied memory and knowledge, sensorial rigor, and the elastic duration of deep play to investigate the poetics of love, loss, and desire. He searches for lost objects – using his body to materialize or conjure their temporary or partial return as performance-based sculptures, performances, or craft-based works. He has presented work in Chicago at the International Museum of Surgical Science, Defibrillator Performance Art Gallery, Latitude, Links Hall, Zhou B. Art Center, Mana Contemporary, and Comfort Station, as well as in performance art festivals in Boston, Los Angeles, and San Francisco. His first curatorial project, MATERIALKINK, is on view at the Leather Archives & Museum in Chicago through January 2018. He received an MFA from the School of the Art Institute of Chicago. José’s work in the basement gallery, Plastimacies, continues an examination of soft sculpture in relationship to the human form.