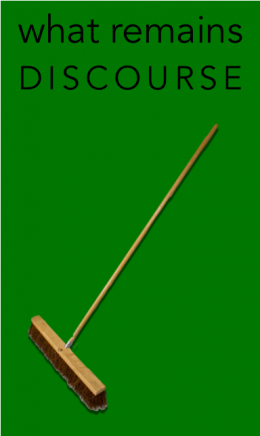 What Remains: On the Sacred, the Lost, and the Forgotten Relics of Live Art is a visual art exhibition and performance art series curated by Netherlands-based ieke Trinks that features a cohort of artists from around the world who responded to an open call to reanimate Defibrillator’s collection of objects from performances that took place over the past nine years. What Remains is February 7th to the 28th at Defibrillator’s former home in Noble Square – framing the site itself as a relic of ephemeral practices. Now ARC Gallery the storefront is located at 1463 W Chicago Avenue, Chicago. Events at ARC Gallery are free and open to the public.

What Remains is divided into FOUR CHAPTERS, each with a specific theme, that features a suite of performance art events: FIXING, MERGE, REFERENTIAL, and CONSUME. The presentation of objects will change from week to week, with new pieces added when relics are reactivated as performances or installations.

Punctuating the first and last Sundays of the exhibition, Soup Kitchen Conversations community based discourse will feature guest speakers sharing their practice and how it relates to aspects of our exhibition chapters, over a hot bowl of soup or stew [vegan+gluten free], followed by an open discussion. Often performative in nature, this isn’t your run-of-the-mill discussion. Please join us for a hot bowl of goodness at both of these free events:

Defibrillator invites you to join us for a brief introduction about the What Remains project by Joseph Ravens and ieke Trinks followed by guest speakers Nicholas Lowe [Chicago b. England] and Felicia Holman [Chicago] in conversation. In the periphery of the gallery, collaborating artists Lola Blake + Ezra Hawkins [Chicago] will install a durational project with a  culmination that can be witnessed in Chapter 4 of What Remains.

Nick Lowe — Extending a gesture: (re)interpretation, residue and reliquary In 2019 Lowe presented goat island archive – we have discovered the performance by making it at Chicago Cultural Center. In the first Soup Kitchen Conversations Lowe will reflect on the ambiguities of performance residue. The material which falls out of live activity is not the performance itself. And like lived experiences of all kinds performance events become memory which over time in this remembered form accrue mythic qualities.

Felicia Holman — The Chicago Black Social Culture Map Honey Pot Performance member, Holman, will talk during the Soup Kitchen Conversations about the CBSCM, an online public humanities project documenting Black social culture from the Great Migration through the early 21st century with a focus on the emergence of house music and dance in the 1970s. The map features profiles for over 350 different venues, including basic information, first-person stories, and supplemental media, all collected through collaborative community research.

Lola Blake + Ezra Hawkins — ASMR LICHEN KITCHEN (no talking):  Phase #1 Lola and Ezra will repurpose Jason Lim’s relics from his performance Duet with Light from 2014 including a stone, candles, infusion bags, and large syringes to cultivate lichen. In the final performance the lichen will be cooked and consumed in a multi course meal.  Working with the modalities of time, ceremony, body, and element, the final piece will take the form of a simultaneous video installation and live performance inspired by ASMR videos – featured in CHAPTER 4: CONSUME.

For this conversation, we can think about collecting as an act of preservation, of naming and renaming. Sending out ripples into the present and near future. Collecting allows us to perceive patterns and connections with the people around us. Once again, Defibrillator invites you to join us for the final part of our discussions series with guest speakers Jojo Baby [Chicago] and Katya Oicherman [Minneapolis, b. Russia] in conversation. Joined by What Remains curators  Joseph Ravens and ieke Trinks closing with a retrospective look at our month long meditation on the impulse to collect and the activation of an archive.

Jojo Baby — Jojo’s Closet A legend in Chicago club culture, Jojo Baby’s unique style transcends drag by taking a sculptural approach to figurative transformation, sometimes setting aside standard ideas of beauty to achieve looks that are abstract, witty, and complex. He is often considered Chicago’s version of Leigh Bowery. JoJo’s Closet, a collection of his puppets and objects began in an actual broom closet at No Hope No Fear Tattoo in the Flat Iron building. Eventually he moved into his own space. Jojo’s Closet is a living installation, constantly shifting, and constantly on display. Jojo’s sculptural practice includes doll making, a passion inspired by his friend and mentor, Greer Lankton, who worked in Andy Warhol’s Factory and for Jim Henson and the Muppets. Often having real human teeth, his morbidly sweet dolls are meticulously stitched.

Lowe joined the faculty at SAIC in 2003 and is Chair of the Department of Historic Preservation. He was born in England where he received the Higher Diploma in Fine Art in 1989 from the Slade School of Art, at University College London. His exhibition and teaching career includes engagements in the United Kingdom, France, Germany and the United States.

Felicia Holman is a life-long Chicagoan and co-founder of the Art Leaders of Color Network and Honey Pot Performance. Felicia creates and presents original interdisciplinary performances which engage audiences and inspire communities. Felicia is also an admitted Facebook junkie and sums up her dynamic entrepreneurial life in 3 words—’Creator, Connector, Conduit’. Honey Pot Performance (‘HPP’) is a creative Afro-diasporic feminist collaborative committed to documenting and interrogating fringe subjectivities amidst the pressures of contemporary global life. HPP enlists modes of creative expressivity to examine the nuances of human relationships including the ways we negotiate identity, belonging and difference in our lives and cultural memberships. Dismantling the vestiges of oppressive social relationships is part of the work. Through critical performance, public humanities programming, and deep community engagement, emphasizing everyday ways of valuing the human. HPP forefronts African diasporic performance traditions. They draw upon a central notion found in performance studies, black feminist discourse and sociology: non-Western, everyday popular and/or folk forms of cultural performance are valuable sites of knowledge production and cultural capital for subjectivities that often exist outside of mainstream communities.

Lola Blake + Ezra Hawkins Lola Blake is a bioartist engaging with sustainability through performance, sculpture, installation, video, and new media. Lola is currently studying for a BFA at the School of the Art Institute of Chicago and is working as an apprentice with DFBRL8R Gallery. They are interested in reevaluating science and culture in western epistemology through considerations of our relationship with microbiology. They have been posing such questions through their ongoing series The Posdiatom, where their relationship with a certain microalgae is investigated. Their work has been shown in San Francisco and Chicago through gallery exhibitions and commissioned works for private clients. Ezra Hawkins is a transgender performance and bio-artist based out of Chicago. His performance background is in Butoh and explores the mind-body relationship in which identity is created and kept while his BioArt focuses on edible plant cultivation, sustainable food practices, and plant growth patterns in relation to physical embodiment. Ezra is currently an apprentice with DFBRL8R Gallery.

Jojo Baby Growing up in Logan Square with three younger brothers, their Greek immigrant father, and their Lakota Indian mother, who was a Bunny at the Chicago Playboy Club in the 60s. JoJo has had many brushes with celebrity. A documentary film produced by Clive Barker (titled, Jojo Baby) chronicles the day-to-day life of the creative man behind the magical personas. During the Bulls’ dynasty years, he did Dennis Rodman’s notorious leopard-spot and camouflage dye jobs. He appeared on multiple episodes of Jenny Jones and had an uncredited bit part in Party Monster, the 2003 biopic starring Macaulay Culkin as homicidal New York club kid Michael Alig. Getting Into Face is a book by photographer Bernard Colbert that documents a long term collaboration between JoJo Baby and Sal-E as they prepared for their Monday night appearances at Boom Boom Room. The five-year weekly photo project captured these Chicago icons renowned for using their bodies as canvases to become masterfully executed conceptual characters. Jojo now works the door at SmartBar’s Queen! on Sundays and other hot parties around town.

Katya Oicherman [Minneapolis, b. Russia] is an artist, researcher and educator working on the subjects of memory and identity as reflected in art and material culture, especially textiles. She lived in Russia, Israel and the UK, currently she is based in Minneapolis, USA. She is a visiting research fellow at the Centre for Jewish Studies, University of Minnesota. She studied textile design and art and modern Jewish studies in Israel and the UK. Her practice-based PhD (Goldsmiths, London) addressed 19th cent. German Jewish ceremonial textiles and their relevance in contemporary art practice. Katya works with a variety of media, including video and installation, performance, weaving and embroidery. She exhibited her work internationally. She taught textile practice and history and headed the department of Textile Design (Shenkar College, Israel).

Joseph Ravens studied audiovisuals at the Gerrit Rietveld Academie [Amsterdam, Netherlands] before earning his Masters of Fine Art in Performance from The School of the Art Institute of Chicago. A two-time recipient of the Illinois Arts Council Fellowship along with other grants and awards have allowed Ravens to build an international reputation. He has presented work in Tempting Failure [London, UK 2018]; 7a*11d [Toronto, Canada 2016]; Bienal DEFORMES [Santiago, Chile 2016]; Live Biennale Vancouver [Canada 2015]; 20th Bienal Internacional de Curitiba [Brazil 2013]; Venice International Performance Art Week [Italy 2012]; and Intrude: Art and Life 366 at Zendai Museum Shanghai [China 2008]; among others. Ravens is founder and director of Defibrillator Gallery and co-founder and director of Rapid Pulse International Performance Art Festival. Visit josephravens.com or DFBRL8R.org for more information.

WHAT REMAINS  ROLES AND CREW