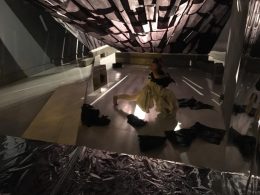 Zephyr Dance Artistic Director Michelle Kranicke collaborates with architect and husband David Sundry to present the world premiere of Valise 13, an interactive series of vignettes that invite audience members to forge their own paths in an exploration of movement and space. Encompassing the entire facility, this site-specific work was developed during a summer residency at DFBRL8R. Performed by Kranicke and Molly Strom, Valise 13 is a succession of separate forays, trajectories, linkages and fleeting formations that chart our inability to tie one moment to another moment, to follow a trail, to dissemble a whole, to adhere to a line of visual argument or adequately involve ourselves in a disparate, continuous unfolding of sound, texture, image and movement. Kranicke and Strom migrate along individual pathways, interacting with transformative materials that allow shifts in physicalities and personas. A shimmering enclosure of impermanent materiality occupies the center of the space, opening the edges around it and encouraging the action to settle in the leftover areas of the gallery. The work’s fractured oblique structure echoes how sense objects inhabit the world. Audience members are challenged to account for the unseen parts and spaces between the fragments, and the movers themselves, as they make decisions about who to follow (or not to follow) and which path to take throughout the evening. The independent trajectories of the movers and audience intertwine and entangle in edges of light, darkness and enclosure.

Zephyr is an experimental dance company with a strong artistic presence in Chicago for more than 20 years. Zephyr pushes to the edge of the discipline to question current trends in dance making and the reduction of the art form to its most quantifiable, easily recognized patterns. Zephyr works to critically investigate the overreliance on virtuosity, popular definitions and/or understandings of dance and the tendency to lean on narrative to inform the abstract nature of movement without confronting the history/meaning of that movement, or the movement itself. Zephyr considers the interaction between performer and viewer and the movement possibilities that arise through that interaction. The company stages its performances in various spaces, from the proscenium stage to large auditorium spaces to galleries, to allow viewers choices in how they encounter, and engage with, movement. The results are works that transform the atmosphere of a space with rich images, sensual movements and unexpected occurrences. For a history of Zephyr, visit zephyrdance.com/about/history/

DAVID SUNDRY is a design/build architect who has been constructing single-family homes, small offices and mixed-use spaces in Chicago since 1989. He is the founder and president of Triple O Construction, a small design/build construction company, and O Group, Inc., its partnering architecture studio in association with Lyle Haag Engineering. Sundry’s architectural/environmental designs for Zephyr include The Balance in Between; Out and Back in Again: an immersive environment of movement, sound and image; Allowances and Occurrences; and Broken Time. He has been collaborating with Zephyr Artistic Director Michelle Kranicke, serving as dramaturge and advising on the architectural and painterly aspects of movement, since 2000. His buildings have been featured in Chicago magazine, Chicago Social and Better Homes and Gardens. He received a BFA in fine arts from the University of Notre Dame and an MFA in painting from Pratt Institute in New York.

Zephyr Dance is supported, in part, by the Alphawood Foundation, The Gaylord and Dorothy Donnelley Foundation, The Richard H. Driehaus Foundation, the City of Chicago Department of Cultural Affairs and Special Events, the Illinois Arts Council and numerous individuals.