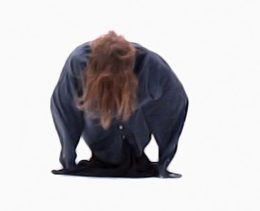 In their performance series UNTURTLED, Berlin­ based choreographer/dancer, ISABELLE SCHAD, and Paris based visual artist, LAUREN GOLDRING, explore the relationship between body and image. The costume is considered a transitional object: a prosthesis of the missing last layer of the body, and simultaneously the first encompassing external space. The costume as organ enables an exploration of the body and the space around it.

In UNTURTLED #4, the body is un­turtled from its shell; from its protective shield against the outside world, liberating it simultaneously from the often stereotyped body images we force onto it. The dancer uses oversized black stretch­pants to reveal and hide, display and transform body parts in an unexpected way – the body itself ultimately becomes a moving sculpture, sometimes vanishing behind a dark membrane and then returning in an unexpected way and place. It appears almost as if the clothes are moving by themselves; in elongations, expansions and contractions, condensations and tightenings produced by the puffs of the blouse, which seemingly take away the body’s own movement impulses. The clothes become a second layer of skin and act like an independent being.

During their duo Unturtled #4 L. Goldring performs a talk on the conceptual resonances of the work.

LAURENT GOLDRING was born in Paris in 1957 and studied at the Ecole Normale Supérieure, Paris (Philosophy) as well as at the City College of New York. Today he works as a visual artist (video, photo, drawing, sculpture). His work demonstrates that the body has very rarely been shown and seen apart from very specific codes. Laurent Goldring has worked with many choreographers such as Saskia Holbling, Sandrine Buring, Donata d’Urso, Xavier Le Roy and Isabelle Schad.

ISABELLE SCHAD is a choreographer and dancer/performer. She studied Classical Dance in Stuttgart. Since 1999 she has produced a number of international events. Her main focus has been: The body and its materiality, the body as process, place and space, origins of movement deriving from the body and its (embryological) developments, relations between body, movement, choreography, image, (re)presentation, form and experience, somatic practices like Body­Mind­Centering, practice as site for learning process, community (implied in the practice), political engagement.

The event is funded by the European Union