Hominal strips down the codes of theatrical artifice in a phantasmagorical and intimate one-on-one encounter with an audience member every 20 minutes. The Triumph of Fame is one of six poems by Petrarch which uses the idea of Triumph allegorically. In the poems, Fame triumphs over Death but is then defeated by Time and Eternity. The Williams Record Staff writer, Rob Hefferon wrote:  “Hominal’s performance showed a dominant control and manipulation of Love, Chastity and Death, only to be ended by a 15-minute time limit and an eternity of being emblazoned in the viewer’s mind.”

Marie-Caroline Hominal is currently based in Geneva, Switzerland. Her practice includes video, text, drawing, songwriting, choreography, and performance art. She received her dance education at the Schweizerische Ballettberufsschule (Tanz Akademie) in Zurich and at the Rambert School of Ballet and Contemporary Dance in London, where she was part of the National Youth Dance Company. She has collaborated with Clive Jenkins, Cristian Vogel, and François Chaignaud (with whom she created Duchesses in 2009). She has also worked with  visual artists Kim Boninsegni, David Hominal, Delphine Coindet and Lukas Beyeler.

As a dancer, Marie-Caroline has worked with La Ribot, Tanztheater Basel, Irène Tassembedo, Blanca Li, Gisèle Vienne, Gilles Jobin, and Marco Berrettini. She was a guest performer for Human Writes by William Forsythe and B.O.B by Dick Wong. Since 2008, she has been showing her work in both theaters and art spaces throughout Europe, South America, North America and China.

The Triumph of Fame has been shown in several art spaces including: Santa Cruz Museum of Art and History (USA), Del Vaz Projects gallery Los Angeles (USA), Under the Radar, The Public Theater, NY (USA), Power Station of Art Shanghai (CN), Hong Kong Art Center (CN), Swiss Cultural Center Paris (FR), and Casa Nova Galeria during the Sao Paulo Art Fair (BR). Hominal has developed miniature one-to-one performances such as Hotel Oloffson (2013) and The Triumph of Fame (2013), as well as full-length performances such as Ballet (2014), Patricia Poses by the Pop Machine (2011) and the live concert performance Silver (2013). In 2015 she received a six-month Geneva residency studio in Berlin where she developed the artisanal radio show, Where’s the MC?. 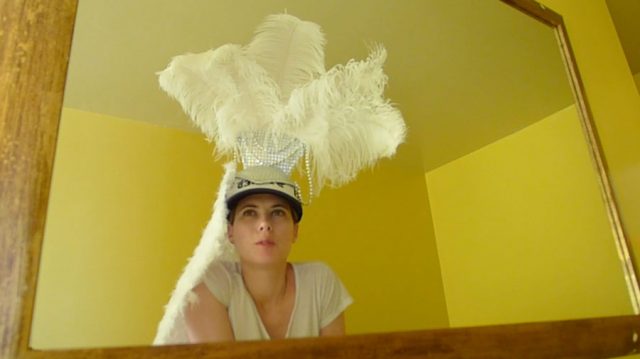 photo: self-portrait, courtesy of the artist

The Triumph of Fame would not be possible without generous support from The Chicago Department of Cultural Affairs and Special Events (DCASE), The School of the Art Institute Performance Department, The Swiss Benevolent Society, and CORODIS, PRO HELVETIA.