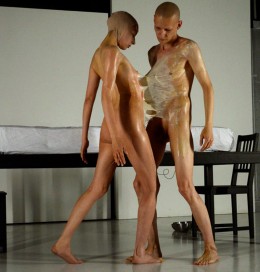 tranSfera searches for non-verbal forms of communication between those in an intimate relationship. it is a hybrid work utilizing live performance, real-time video and sonic compositions. between the senders and the receivers stands the human body, in which electronic systems and impulse transmitters are placed. through media and technology the artists alter the perceived image of the body, referring to modern information chaos and the manipulation of reality.

SUKA OFF is a POLAND based artist collective existing since 1995. the members of SUKA OFF are PIOTR WEGRZYNSKI (founder, visual artist, performer) and SYLVIA LAJBIG (classical philologist, performer). they have been creating work across visual theatre, performance art, club action, installation, photography, video art and music visuals. SUKA OFF’s work has been presented in theaters, art galleries, clubs and festivals in most EUROPEAN countries, as well as in CANADA, USA, ARGENTINA, BRAZIL, CHILE, MEXICO and JAPAN. for over 10 years they have been lecturing and leading workshops in POLAND and abroad.
the recurring themes of SUKA OFF art are:

more about the performance: tranSfera begins with a woman lying on a white mattress in the pose of sleeping hermaphrodite. when the man enters her space, it’s like if he entered the stream of SALMAKIS – he begins the ritual of self-alteration. the man and woman try to become one with use of physical and multimedia processes. they replace natural senses with electronic devices to be able to look and sound the same. but the “remixed” version of themselves remains abstracted from their bodies and is visible only in the stream of electrical impulses and light from a projector. the roles of male and female in “tranSfera” are based on GREEK philosophers, who considered woman as the matter – wet, mutable and unbounded, while the man was dry, stable and bounded. In the process of creation man determines the form and woman contributes the matter. the artists are not interested in the sociological, cultural or political context of this theory. they are transferring it into the field of visual arts and replacing the traditional “material” and “tool” with the “female” and “male”. to learn more about the project visit sukaoff-transfera.blogspot.com/p/ performance.html