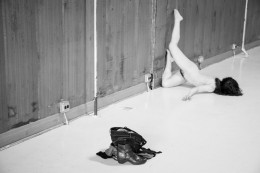 the traditional performance art event usually consists of 3-8 performances, each being anywhere from 15 minutes to one hour. this exhibition structure exists all over the world – in festivals, in galleries, in little alternative spaces. it controls and dictates how performance art is experienced and curated.

PAUL COUILLARD has been working as an artist, curator, and cultural theorist since 1985. he has created more than 200 solo and collaborative performance works in 22 countries, often working with his partner ED JOHNSON. COUILLARD was the PERFORMANCE ART CURATOR for FADO from its inception in 1993 until 2007, and is also a founding co-curator of TORONTO’S 7A*11D INTERNATIONAL FESTIVAL OF PERFORMANCE ART. he is the editor of FADO’S CANADIAN PERFORMANCE ART LEGENDS, a series of books on senior CANADIAN performance artists, including ALAIN-MARTIN RICHARD: PERFORMANCES, MANŒUVRES ET AUTRES HYPOTHÈSES DE DISPARITION / PERFORMANCES, MANOEUVRES and OTHER HYPOTHESES for DISAPPEARING (a bilingual monograph co-edited with FRENCH editor ALEXANDRA LIVA), which will be published in 2014 by FADO PERFORMANCE INC, SAGAMIE ÉDITION D’ART and LES CAUSES PERDUES IN©. COUILLARD has been a lecturer at MCMASTER UNIVERSITY and the UNIVERSITY OF TORONTO SCARBOROUGH, and is currently a DOCTORAL STUDENT in the YORK/RYERSON joint graduate program in COMMUNICATION and CULTURE. his research is focused on a theoretical recuperation of the notion of presence as an ongoing and entangled process of emergence or becoming.

working primarily in performance art AUTUMN HAYS executes her pieces using a wide variety of media. the focus of her work is a discussion of complications arising from the various systems of classification and organization that construct the perception of difference and the other. AUTUMN presents the body as a literal archival source, exploring disability as a personal burden and segregating category. HAYS graduated the SCHOOL of the ART INSTITUTE of CHICAGO with an MFA in performance where she received the JOHN QUINCY ADAMS FELLOWSHIP. she received her BA in VISUAL ARTS at UCSD. HAYS is the recipient of numerous scholarships, grants and awards including two major JACK KENT COOKE association scholarships. today AUTUMN HAYS is an active artist, curator, teacher and writer.

GATH’S artwork is for everyone. her portfolio includes conceptual two-dimensional works, interactive/participatory performances and events, ephemeral sculpture, installation, and books. the goal of those artworks is to inspire affinity between humans. she also practices stream-of-consciousness with her sewing machine. GATH trained in CHINESE language and cultural studies at TUFTS UNIVERSITY and received her MFA from the MASSACHUSETTS COLLEGE OF ART in the studio for interrelated media.

LACOMBE (MONTREAL, QC) has developed a unique body-based practice since obtaining her BFA from CONCORDIA UNIVERSITY in 2006. purposefully minimalist, her research-based practice is located somewhere between the concerns of performance and the visual arts (drawing, painting, sculpture), where bodily gesture and mark marking are entwined and confused. both confrontational and tragic, her short actions often generate corporeal states of being and/or body markings that exist as conceptual (performances of) representations (or extensions) of her body. her work has been show in CANADA, the USA and GERMANY in the context of performance events, exhibitions and colloquiums. her practice as an artist is paralleled by a strong commitment to supporting alternative models of dissemination for live art and undisciplined practices. she has worked with a number of MONTREAL artist-run centres including articule and LA CENTRALE GALERIE POWERHOUSE, and is currently the general coordinator of VIVA! ART ACTION, a local biennial performance art festival. in addition, she has had a number of complimentary experiences in curating, writing and resisting dominant culture.

MICHAL SAMAMA (ISRAEL, 1977) is a performance artist creating body-based art works that incorporate movement, sound, objects, text, installation and site-specific practices. SAMAMA is currently an MFA candidate at THE SCHOOL of the ART INSTITUTE of CHICAGO and the recipient of SAIC 2013 NEW ARTIST SOCIETY SCHOLARSHIP AWARD. in CHICAGO, she recently presented her work at NORTHWESTERN UNIVERSITY PERFORMANCE STUDIES CONFERENCE: IN BODIES WE TRUST: PERFORMANCE, AFFECT, & POLITICAL ECONOMY and at SAIC NEW BLOOD FESTIVAL at LINKS HALL. her recent residencies include: 2012-2013 FRESH TRACKS PERFORMANCE and RESIDENCY PROGRAM at NEW YORK LIVE ARTS (formerly DANCE THEATER WORKSHOP) in which she created her works ‘THE CHICKEN MEMORIAL’, ‘A PIECE OF MEAT STUCK IN MY THROAT’ and ‘MOTHER TONGUE’, MOVEMENT RESEARCH 2011-2013 ARTIST-IN-RESIDENCE, LIFTOFF RESIDENCY-NEW DANCE ALLIANCE. in NEW YORK her work has been presented at NEW YORK LIVE ARTS, MOVEMENT RESEARCH at JUDSON CHURCH, PERFORMANCE MIX FESTIVAL a the FLEA THEATER, DIXON PLACE, JOYCE SOHO, CPR (CENTER FOR PERFORMANCE RESEARCH), CHEZ BUSHWICK, PRISKA C JUSCHKA GALLERY, FIRST STREET GREEN at FIRST PARK, VAUDEVILLE PARK, AUNTS and the 92ND STREET Y, where she also curated SUNDAY AT THREE in JANUARY 2012. SAMAMA has performed at the HOME SWEET HOME FESTIVAL, WERKSTATT DER KULTUREN and the GRIMMUSEUM in BERLIN, an in ISRAEL in many prominent venues including SUZANNE DELLAL CENTER, TMUNA THEATER and TZAVTA THEATER. her play was presented at ACT 2 FESTIVAL for experimental theater in HAIFA. she received her BA in dance and choreography from KIBBUTZIM COLLEGE of EDUCATION in TEL-AVIV and also graduated from CONTEMPORARY CENTER for the PERFORMING ARTS in JAFFA, where she studied theater, writing and performance art.

PAUL graduated from the SCHOOL of the MUSEUM of FINE ART BOSTON with a diploma in studio practice and a fifth-year certificate. since 2007, WADDELL has enjoyed teaching drawing and painting at the IDYLLWILD ARTS ACADEMY. recent career highlights include performing at the 10th annual OPEN PERFORMANCE FESTIVAL in BEIJING, CHINA; performances at the WATERLOO CENTER for the ARTS (IOWA), MOBIUS, and MEME (both in CAMBRIDGE); and speaking engagements at UCLA and at the UNIVERSITY of NORTHERN IOWA. PAUL presented paintings at the LA MONTAGNE GALLERY, BOSTON, in 2008. PAUL’S performance work has been written about in the BOSTON DIG, ART PAPERS, BEIJING TODAY and TIMEOUT BOSTON, as well as various blogs.

all that exists, in nature and human creation, is ours for reflection and contemplation. taking the time to observe, listen and touch is both an act of rest and exploration. my work is a predominantly intuitive and sensory engagement with my surroundings, disregarding notions of usefulness, common meaning and a prescribed narrative. a table then, is not something I eat on or write on, but a shape with certain physical descriptions, certain sensory textures, certain sound properties. these physical relationships feed my interdisciplinary practice of site-specific performance, installation, sculpture, collage, and video. SUE MURAD is an interdisciplinary artist, with an emphasis on performance art. dhe was born in NEW HAMPSHIRE and graduated from the MASSACHUSETTS COLLEGE of ART & DESIGN with departmental honors in SCULPTURE. upon graduation, she envisioned ORANGE, a six-year art & design collaborative with fellow artist, CHARITY MALIN. together they produced several bodies of work: ‘AMERICANS and THE BEACH,’ ‘STRIPE,’ and ‘BRIDE’ and worked extensively with the BOSTON PUBLIC LIBRARIES on interior design projects. throughout 2003, MURAD orchestrated (undercover) improvisational performances at the MASSACHUSETTS INSTITUTE of TECHNOLOGY, and in 2004 joined the PERFORMANCE ART BAND, UV PROTECTION, for which she won a 2008 MASSACHUSETTS CULTURAL COUNCIL AWARD in CHOREOGRAPHY. for three years, MURAD turned her studio into a library and studied ancient history, cross-referencing her findings. an art book, RUTH, and two large scale performances: ‘FIGURATIVE,’ an undercover performance at the MUSEUM of FINE ARTS BOSTON, and ‘BURIED- FUNERALS and OTHER FORMAL ARRANGEMENTS,’ have been produced from these studies. In 2012 MURAD created a companion performance to the sculpture of ANTONIADIS & STONE at SAMSON PROJECTS and most recently performs at monthly dinner party events hosted by fellow artist JESSICA GATH amd CHRISTO WOOD. she currently lives in BOSTON and works as an ARTIST-IN-RESIDENT at BOSTON CHILDREN’S HOSPITAL.

JOSHUA KENT is a CHICAGO based inner-disciplinary artist. his visual and performative practice navigates the intersection of movement research and sculptural installation. his body of work explores notions of the self, and manifestations of the interior by way of material objects. JOSHUA graduated from the performance department of The SCHOOL of the ART INSTITUTE of CHICAGO in 2010, where he was a PRESIDENTIAL MERIT SCHOLAR. recently MR KENT was awarded a CAAP GRANT from the city of CHICAGO, and was selected as a 2012 LINKUP RESIDENCY ARTIST at LINKS HALL. he was one of ten local artists to show in the 2013 RAPID PULSE INTERNATIONAL PERFORMANCE FESTIVAL.

from his early practice, starting as a street photographer tracking SHANGHAI prostitutes to the development of a pseudo-transvestite web celebrity, MIAO JIAXIN has evolved an edgy and protean practice. beginning in SHANGHAI, MIAO then immigrated to NEW YORK, expanding his view of urban streets towards a more conceptual public stage, where his works travel across different media. he often documents his performances and installations, then converting the documentation into photographs and videos that stand on their own as works. initiated from universal themes of existentialism, MIAO’S works tend to be politically participating in contemporary events, yet still expressing the universal theme of urban angst. among his performative practices, he has blended his naked body into the bleak streets of a midnight NEW YORK CITY, traveled inside a suitcase hauled by his mother through urban crowds, did live-feed erotic performances on an interactive pornographic broadcasting website, and dressed as a CHINESE businessman for a year when working towards his MFA at SCHOOL of the ART INSTITUTE of CHICAGO. MIAO’S works often express the ambivalent and sometimes antagonistic tension that always exists between the individual and governing or cultural authorities, questioning assumptions about power in relation to individual identity, race, gender, sexuality and social class. he posits the artist’s nature as one who transgresses boundaries, challenges consensus, and stays distance from authorities.

THOMAS ALBRECHT’s performance projects have explored ritual and language in public spaces, prodding cultural beliefs and individual doubts. current interests involve duration and elements of ABSURDIST THEATRE, laying bare contingency in human constructions and slippage between truth and fiction. recent performances have focused on recurring motifs that find multiple iterations depending on site, context and audience. his most recent projects begin with the premise that the world is complex, elusive, that knowing is dynamic as we tinker and cobble experience. life is filled with the props we imbue with meaning. his performance work serves as a meditation on the contingency of our constructions, the temporal nature of our makings and markings, in language and in gesture. THOMAS ALBRECHT has performed throughout the UNITED STATES and in EUROPE, notably at GRACE EXHIBITION SPACE, DEFIBRILLATOR PERFORMANCE ART GALLERY, FITNESS CENTER for ART and TACTICS, DIMANCHE ROUGE, and DURING FESTIVALS SUCH as the BROOKLYN INTERNATIONAL PERFORMING ARTS FESTIVAL and MONTH of PERFORMANCE ART BERLIN. he received his BFA from RHODE ISLAND SCHOOL of DESIGN, a MATER of ARTS in RELIGION from YALE UNIVERSITY, and his MFA from the UNIVERSITY of WASHINGTON. he serves as an assistant professor in the art department at the STATE UNIVERSITY of NEW YORK at NEW PALTZ.