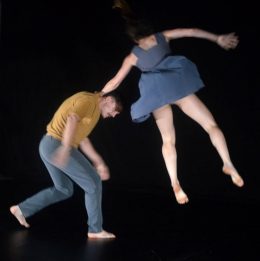 and performances by local artists
Keegan/Smeza

Suddenly Everywhere is a dance duet by Bruno Isaković and Mia Zalukar based on the play and movie, Who’s Afraid of Virginia Woolf? Mia meets Bruno and Bruno meets Mia. It is an altogether different world from that of Martha’s and George’s or Liz’s and Dick’s. Or is it? Through movement and encounter of two bodies and their opposite poles, Suddenly Everywhere explores the influences on our (ir)rational decisions and states of being—how we are woven by our histories, experiences, (in)securities, and personal aims for the future. Deconstructing the complicated structure of paths we take and gaps therein, Suddenly Everywhere makes visible that which is seemingly not present. Co-created and performed by Bruno Isaković and Mia Zalukar. Dramaturgy by Katarina Pejović. Video design by Dora Durkesac. Produced and premiered in Croatia at Perforations Festival, 2017.

photos courtesy of the artists

Bruno Isaković is a performer and choreographer living in Zagreb, Croatia. He graduated with a degree in contemporary dance from Amsterdam School of the Arts in 2009. From year 2011 till 2015 he was a member of the Studio for Contemporary Dance, a company based in Zagreb. He is the artistic director of Sounded Bodies Festival happening annually in the fall season in Zagreb, Croatia. Bruno’s solo Denuded (2013), toured around the world and was performed nearly thirty times on five continents. This led him to create an ensemble version of the work. The performance Disclosures was created and premiered in New York in September 2015, while the Croatian version raSkrivanja, premiered in June 2016. Isaković regularly teaches workshops and dance classes. He has received various scholarships, as well as Jury Award and Best Solo Dance at Solo Dance International Festival in Budapest and Croatian national award 2016 as a best choreographer for Denuded (ensemble version).

Mia Zalukar Mia Zalukar was born in 1989. in Zagreb. After graduation from High school of Contemporary dance “Ana Maletić” she continues her professional education in SEAD (Salzburg Experimental Academy of Dance) and finishes BA study of cultural management in Croatia. During her career she collaborated with many choreographers from Croatia and the region such as Marjana Krajač, Irma Omerzo and Bruno Isaković. In 2015. together with her collegues she got Croatian dancers association award for the best performing company for a piece “Variations on a sensitive” by Marjana Krajač, 2016. she was nominated for the Croatian Theatre Award in 2016. for the best performance in “Denuded” and “Disclosures” by Bruno Isaković.  She is also working as a full time teacher at the Art high school teaching stage performance, contemporary dance and rhytmics.

Keegan Smeza are from Southern California and currently reside in Chicago. Since 2013 their mission has been to reinvent and reimagine performance as we know it. Blending aspects of absurdist theatre, performance art, and comedy they aim to blur lines within these fields to create unique events and experiences. There is 2 of us. They/Their/Them.