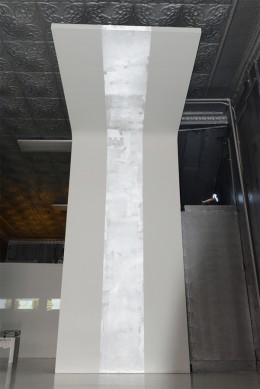 SOFT OPENING: GENDER ASSIGNMENT WED 02.12.14 @ 6 – 7PM
a soft opening for SOFT DRUGS. MELISSA POTTER performs the interactive and ongoing project GENDER ASSIGNMENT, where POTTER uses DR. SANDRA BEM’s SEX ROLE INVENTORY test to engage audiences in a dialogue about gender identity and roles at this cultural moment. participants take a short test and get their “results” from POTTER, who performs as a self-proclaimed “gender expert.” the results conflate participant interactions with the science of DR. BEM, whose test remains in wide use after more than thirty years, to examine how we p 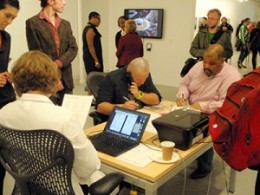 lay with gender identity and how words we use to describe human behavior can be gendered.

the project results feed into POTTER’S ongoing writing on GENDER ASSIGNMENT (www.genderassignment.tumblr.com) where she explores gender from a widely-diverse point of view, often inspired by the test takers themselves. the platform is interactive, inviting submissions, interviews, and ideas for post explorations. the blog also contextualizes gender-based events within the historical and cultural framework of POTTER’S personal experience as a woman growing up in AMERICA. in her lifetime, sexual harassment and title 9 laws were put into place, and the ERA continues over and again to be shut down in congress.

MELISSA POTTER is a multi-media artist working in paper, video, animation and social practice collaborations. her work has been exhibited at venues including WHITE COLUMNS, BRONX MUSEUM of the ARTS, THE VIDEODUMBO FESTIVAL, and GALERIJA ZVONO in BELGRADE, SERBIA. Grants include 2 FULBRIGHT AWARDS, ARTSLINK, THE SOROS FUND for ARTS and CULTURE, and THE TRUST for MUTUAL UNDERSTANDING for her research and art in SOUTHEAST EUROPE. she is currently an associate professor and DIRECTOR of the BOOK & PAPER PROGRAM in THE INTERDISCIPLINARY ARTS DEPARTMENT of COLUMBIA COLLEGE CHICAGO.

across performance and objects, SOFT DRUGS looks at how artworks incorporate play as process or idea for understanding or perceiving the world. play in artistic practice has a way of opening up audiences to new possibilities and perspectives and, while this activity is often felt to be a game, it is a key and rigorous approach in each artist’s idiosyncratic form of production. play can also employ humor or quirk to offset weighty issues or generate new awareness of one’s surroundings. the exhibition showcases performances, moving images, and sculptures that examine issues or challenges of the body, distraction, attraction, the built environment, and the apocalypse as sets of phenomena that could be heavy though lightened through playful and artful tactics.

TERESA SILVA is organizer of the 2014 MFA THESIS EXHIBITIONS for the SCHOOL of ART and ART HISTORY at the UNIVERSITY of ILLINOIS at CHICAGO. she has presented projects at the CHICAGO ARTISTS COALITION, THE FRANKLIN, THE AFRICAN-AMERICAN CULTURAL CENTER at UIC, and THE JANE ADDAMS HULL-HOUSE MUSEUM, with upcoming projects at DEFIBRILLATOR GALLERY and THE COMFORT STATION. her writings have appeared in MUSEUMS & SOCIAL ISSUES published by LEFT COAST PRESS, INC.; and PROOF, a 2010 UIC MFA EXHIBITION catalogue. In 2011, she collaborated with CORBETT VS. DEMPSEY on the RICHARD KOPPE RETROSPECTIVE, GYROSCOPIC: CUBIST DRAWINGS and LATE PAINTINGS, 1936-1970.

A&DWORKS CHICAGO is part of a national initiative by the STAMPS SCHOOL of ART & DESIGN at the UNIVERSITY of MICHIGAN to foster the exchange of ideas among artists and other professionals through exhibitions, performances, workshops and just plain fun. in conjunction with the 2014 annual meeting of the COLLEGE ART ASSOCIATION in CHICAGO, SOFT DRUGS features a series of works that investigate play as a vehicle for engaging with and challenging audiences to reconsider their everyday routines and environments.

KENDALL BABL (1976) is a multidisciplinary visual artist based in CHICAGO with an MFA in SCULPTURE form THE SCHOOL of the ART INSTITUTE of CHICAGO, 2013, and a BFA from UNIVERSITY of MICHIGAN, 2002.

SARAH BERKELEY holds an MFA in ART & DESIGN from the UNIVERSITY of MICHIGAN (2011) and a BFA with DISTINCTION in STUDIO ART from the UNIVERSITY of NEBRASKA-LINCOLN (2002). she is the recipient of a NEBRASKA WESLEYAN FACULTY DEVELOPMENT GRANT, THE CITY OF CHICAGO COMMUNITY ARTS ASSISTANCE PROGRAM (CAAP) GRANT, THE SMUCKER-WAGSTAFF RESEARCH GRANT, THE RACKHAM RESEARCH GRANT, and THE UNIVERSITY of MICHIGAN SCHOOL of ART & DESIGN INTERNATIONAL TRAVEL GRANT. SARAH BERKELEY was born on the north shore of MASSACHUSETTS and subsequently spent her childhood in MICHIGAN and COLORADO. between high school and college she lived in Ireland for six months. during her undergraduate studies at UNL she spent a year in MADRID, SPAIN. at the completion of her degree she began her career as a web designer in NEW YORK CITY and in 2003 moved to BERLIN, GERMANY to pursue her art career. while there, she co-founded the BERLIN COLLABORATIVE DRAWING GROUP and discovered a passion for teaching. after three years in BERLIN, she returned to the UNITED STATES to prepare for graduate school. prior to her current teaching position at NEBRASKA WESLEYAN UNIVERSITY, she taught at the SCHOOL of the ART INSTITUTE of CHICAGO.

BUKI BODUNRIN is a film, video, and installation artist who explores language, culture, and media. in her collage animations, she manipulates film using unorthodox manual and digital techniques in order to produce unexpected cinematic experiences. BODUNRIN completed her MFA at the SCHOOL of the ART INSTITUTE of CHICAGO. her work has been screened or exhibited nationally and internationally at venues that include the JERSEY CITY MUSEUM of ART, THE SCOPE ART FAIR, ONION CITY FILM FESTIVAL, THE CHICAGO UNDERGROUND FILM FESTIVAL, NIGHTINGALE, CHICAGO, FESTIVAL ANIMATOR, POZNAŃ, POLAND, OK,QUOI? FESTIVAL, SACKVILLE, NEW BRUNSWICK, ANTHOLOGY FILM ARCHIVES, NEW YORK, and THE BLACK CINEMA HOUSE, CHICAGO. she was an artist in residence at the CHICAGO ARTISTS COALITION as a participant of the BOLT residency, which is funded by the ANDY WARHOL FOUNDATION. she lives and works in CHICAGO.

MEG DUGUID believes that documentation is paramount to her art making and is invested in the ways documentation and art can be integrated in a single practice. she received her BFA from the SCHOOL of the ART INSTITUTE of CHICAGO and her MFA from BARD COLLEGE. she has performed and exhibited at the MUSEUM of CONTEMPORARY ART, 6018 NORTH, SLOW GALLERY and DEFIBRILLATOR performance art gallery in CHICAGO as well as THE DUMBO ARTS FESTIVAL in BROOKLYN, 667 SHOTWELL in SAN FRANCISCO and the ZONA MACO ART FAIR in MEXICO CITY. DUGUID has screened work at SYNTHETIC ZERO in NEW YORK, SPIDERBUG in CHICAGO, and at THE LAST SUPPER FESTIVAL in BROOKLYN. from 2009 to 2011 she ran CLUTCH GALLERY, a 25 square-inch white cube located in the heart of her purse, since then she lends her purse to others to curate and carry. DUGUID lives and works in Chicago, IL with her husband and three cats.

JULIA KLEIN is an artist whose work often relates to questions of function, process, and change. She received a BFA from the UNIVERSITY of MICHIGAN and an MFA from BARD COLLEGE. her work has appeared in such venues as THREEWALLS (CHICAGO); MUSEUM of CONTEMPORARY ART DETROIT, MOCAD; GRIDSPACE (BROOKLYN); HYDE PARK ART CENTER (CHICAGO). in 2013 she participated in the TERRA FOUNDATION SUMMER RESIDENCY in GIVERNY, THE DEPE SPACE RESIDENCY PROGRAM at MOCAD, and a RESEARCH RESIDENCY at SITTERWERK (ST GALLEN, SWITZERLAND). KLEIN also runs SOBERSCOVE PRESS, which publishes art-related materials. soberscove.com

NICOLE MARROQUIN is an assistant professor of ART EDUCATION at SCHOOL of the ART INSTITUTE of CHICAGO. she earned her BFA in 1999 from EASTERN MICHIGAN UNIVERSITY; and her MFA in 2008 from UNIVERSITY OF MICHIGAN.

MOTHERGIRL (KATY ALBERT and SOPHIA HAMILTON) is a CHICAGO based performance duo whose work has taken the form of installation, durational event, and guided audience interaction. MOTHERGIRL’S characters, and the worlds they inhabit, exhibit a strategically refracted or misrepresented view of current political and philosophical discourse, creating a space where viewers are challenged to think critically about their own relationships with feminism, consumerism, and representational visuality. they have performed at RAPID PULSE INTERNATIONAL PERFORMANCE ART FESTIVAL, MCA CHICAGO FIRST FRIDAYS, ROUGH TRADE II ARTIST EXCHANGE, OUT of SITE, HAPPY COLLABORATIONISTS, and ROXABOXEN. they are founders and hosts of BITS and PIECES: A MONTHLY SALON for IDEAS and EXPERIMENTS. their three person show, FEELING IS MUTUAL, is currently on view at the CHICAGO ARTIST COALITION as part of their 2013 HATCH residency.

SABINA OTT has been exhibiting since 1985, SABINA OTT has participated in solo and group exhibitions internationally in institutions such as the AUCKLAND ART GALLERY, AUCKLAND, NEW ZEALAND; AUSTRALIAN CONTEMPORARY ARTS CENTER, MELBOURNE, AUSTRALIA; CONTEMPORARY ARTS CENTER in CINCINNATI, OHIO, THE CONTEMPORARY ART MUSEUM in ST. LOUIS, MISSOURI and THE CLEVELAND CENTER for CONTEMPORARY ART, CLEVELAND OHIO; THE LOS ANGELES COUNTY MUSEUM of ART, LOS ANGELES, CALIFORNIA THE METROPOLITAN MUSEUM of ART, NEW YORK, NEW YORK and THE BROOKLYN ART MUSEUM, BROOKLYN, NEW YORK. she has received a NATIONAL ENDOWMENT for the ARTS INDIVIDUAL ARTISTS GRANT and a HOWARD FOUNDATION GRANT from BROWN UNIVERSITY. She is professor of ART at COLUMBIA COLLEGE CHICAGO, CHICAGO, IL and runs TERRAIN EXHIBITIONS, a project space out of her front yard in OAK PARK, IL. TERRAIN EXHIBITIONS has shown over 30 artists in the two and a half years of its establishment.

ERIK L. PETERSON is a pro-bono public artist, sculptor, and curator living in CHICAGO. he is best known for his large-scale urban interventions (FACE VALUE and INNER STATE) and signature edible ice cream sculptures (CREAMCYCLE and SOFT PALATE). public performances employing sculptural elements like TWO TOW’N and SQUARE DANCE, are camouflaged urban spectacles, while the annual SOUTHWEST WISCONSIN MAKE YOUR OWN SOFTBALL LEAGUE game gathers artists who build their own bats and balls in order to play. additionally, PETERSON is a founder of HYDE PARK KUNSTVEREIN, a community museum and solo project space in CHICAGO.