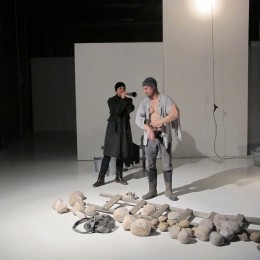 the actual sea spans the horizon of human imagination, its surface and depths captured in varied metaphor. the real and the romantic often collide, as old stories merge with present realities: tales of loss, watching, waiting, hubris, and, possibly, hope against the backdrop of an ever-shifting line between sky and sea. the series of three performances by THOMAS ALBRECHT explores the tension between actual and fictive, and the fluidity of experience between.

THOMAS ALBRECHT’S performances explore ritual and language in public spaces, prodding cultural beliefs and individual doubts. current projects involve duration and elements of absurdist theater, laying bare contingency in human constructions and slippage between truth and fiction. he has performed and exhibited throughout the UNITED STATES and in EUROPE, and has initiated unscheduled interventions on sidewalks in multiple U.S. cities; his interactions with local police have been few. he received his BFA from RHODE ISLAND SCHOOL of DESIGN, a MASTER of ARTS in RELIGION at YALE UNIVERSITY, and his MFA from the UNIVERSITY of WASHINGTON in SEATTLE. he served as the MENIL SCHOLAR at the YALE INSTITUTE of SACRED MUSIC and was SELECTED as a FACULTY FELLOW for the ILLINOIS PROGRAM for RESEARCH in the HUMANITIES. he currently serves as an assistant professor of art at the STATE UNIVERSITY of NEW YORK at NEW PALTZ.

RAE GOODWIN’S work in performance, photography, and sculpture examines aspects of maternal ancestry as it influences the construction of identity, as well as gender-based assumptions about freedom, the unknown and nature. using repetitive methods and suggestive materials, she challenges her own concepts of identity, family, gender and society and invites viewers to examine their own consciousness through the process. RAE received her MFA from WINTHROP UNIVERSITY and has shown at the contemporary in ATLANTA, MOTHERLODGE LIVE ARTS EXCHANGE, MCCOLL CENTER for VISUAL ART and other venues nationally and internationally. she currently serves as DIRECTOR of ART FOUNDATIONS at the UNIVERSITY of KENTUCKY and this spring, embarks on a socially engaged project with FRENCH grandmothers in a small village, while in residence at CAMAC.