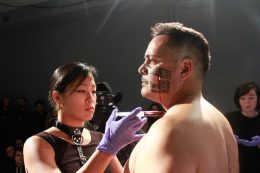 and a special announcement by
Joseph Ravens and Michael Zhou

[re]IGNITE is an evening of performance art organized by Defibrillator to celebrate the 13th Anniversary of Zhou B Art Center and to make a very special announcement. The powerful combination of internationally respected artists in this exhibition were invited because of their outstanding contributions to contemporary performance practices and their meaningful voices within ongoing global dialogues surrounding Performance Art.

Zhou B 13th Anniversary festivities culminate on Friday, October 20 at 7PM for the opening of Inception, an immersive multi-sense experience. 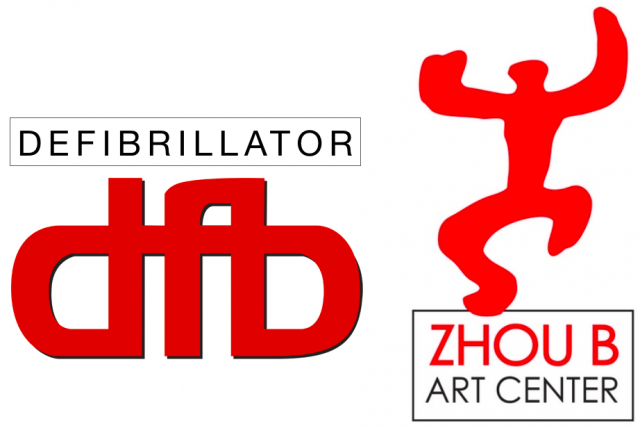 Máiréad Delaney is an Irish-American artist working transatlantically in performance and installation. She explores how gendered bodies respond to the unleashing of systemic violence. Delaney studied at the postgraduate level in Ireland, working with the Irish women’s collective Survivors of Symphysiotomy. Delaney has exhibited internationally, in New York, Ireland and the UK, and Ethiopia. She has presented work in the 2015 Dublin Live Art Festival and BIPAF, at the Queen’s Museum, Grace Exhibition Space, Panoply Performance Laboratory, for Dublin’s Livestock and with Dublin-based collective Pre-form and Bbeyond at the Ulster Museum in Belfast. She has also made a series of public performances entitled ‘Hold Harmless,’ outside the National Maternity Hospital and the Four Courts in Dublin.

Miao Jiaxin began in Shanghai, where his photography works expressed the universal theme of urban angst, Miao then immigrated to New York, expanding his view of urban streets towards a more conceptual public stage. Among his performative practices across different media, Miao has blended his naked body into the bleak streets of a midnight New York City, traveled inside a suitcase hauled by his mother through urban crowds, made live-feed erotic performances on an interactive pornographic broadcasting website, and dressed as a Chinese businessman for an entire year when working towards his MFA at School of the Art Institute of Chicago. More lately, he converted his New York studio into a jail and charged $1 per night as accommodation on Airbnb and Facebook. Miao’s works often express the ambivalent and sometimes antagonistic tension that always exists between the individual and governing or cultural authorities, questioning assumptions about power in relation to identity politics. He posits the artist’s nature as one who transgresses boundaries, challenges consensus, and stays distance from authorities.

Roberto Sifuentes + Aram Han Sifuentes are husband and wife artistic powerhouses. A founding member of the performance group La Pocha Nostra, Roberto has collaborated and performed with Guillermo Gómez-Peña and other Pocha Nostra artists throughout the United States, Europe and Latin America. Sifuentes is currently Acting Chair and Associate Professor of Performance at the School of the Art Institute of Chicago. Aram uses a needle and thread as her tools to examine immigration, citizenship, race and craft, drawing on both personal experiences and shared cultural identity. Her work has been exhibited and performed at the Whitney Museum of American Art; Museum of Contemporary Art, Chicago; Jane Addams Hull-House Museum; Elmhurst Art Museum; Chicago Cultural Center; Wing Luke Museum of Asian Pacific American Experience, Seattle, Washington; and Chung Young Yang Embroidery Museum in Seoul, South Korea, among others.

Michael Zhou is Executive Director of the Zhou B Art Center in Chicago’s historic Bridgeport neighborhood. Engaging in cultural dialogue through innovative art exhibitions and programming, Zhou B provides a collaborative environment with exhibition galleries, nearly 50 resident artist studios, and a semi-permanent collection of the Zhou Brothers’ artwork. Groundbreaking monthly exhibitions on the second floor along with Open Studios throughout the building take place the Third Friday of each month.

Joseph Ravens is Executive Director of DFBRL8R (a.k.a. Defibrillator), a non-profit 501c3 organization focusing on performance art. Presenting a vast range of time-based practices in order to provoke thought and stimulate discourse surrounding live art, Defibrillator is dedicated to fostering local makers while invigorating Chicago with artists of exceptional calibre from around the world. Defibrillator champions work that looks to the body in concert and conversation with time, object, space, architecture, and society.

Defibrillator is made possible with support from the Zhou B Art Center, the Martha Strutters Farley and Donald C. Farley, Jr. Family Foundation; DFBRL8R Board of Directors; the School of the Art Institute of Chicago, Department of Performance; and generous contributions from our loving community. 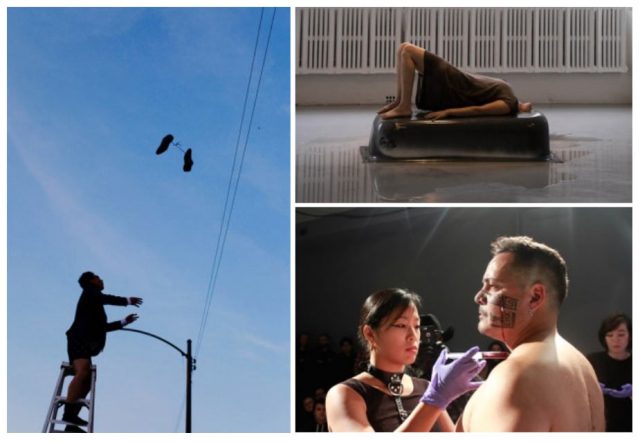