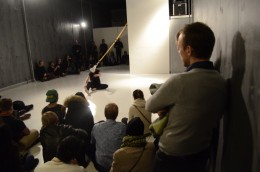 QUEER CHICAGO is an international festival of performance art that aims to create a new understanding of “queer” that redefines the preconceived, expected and stereotypical notions of the term.

in addition to the performances there will be a roundtable discussion:

BRUNO ISAKOVIĆ (CROATIA) graduated from AMSTERDAM SCHOOL of the ARTS. in 2010, he returned to CROATIA to continue intensive activities in the field of dance art. he is a member of CONTEMPORARY DANCE STUDIO and works with different choreographers (IRMA OMERZO, SANJA TROPP, ANA-MARIJA BOGDANOVIĆ, FRANCESCO SCAVETTA, SILVIJA MARCHIG, PAVLE HEIDLER, among others). He also creates his own work and conducts workshops. his piece, DENUDED, flirts with associations to the other-worldly, or demon-like. ritual atmosphere, created between the spectator and the performer will serve as the trigger for the process of transformation, that which makes visible the translation of the imagined through the ever-changing physical presence of a devoted body.

GABRIELA MUREB (BRAZIL) graduated in painting from the FEDERAL UNIVERSITY of RIO DE JANEIRO where she also earned a master of science in visual languages. she has won numerous awards and has presented her work all throughout BRAZIL, through the RUMOS ITAU CULTURAL, and has been part of exhibitions in the MUSEUM of CONTEMPORARY ART in RIO DE JANEIRO and other galleries. in her piece, UNTITLED PERFORMANCE, the artist puts herself in a situation from which she has no escape. even though she knows she is trapped, she continues trying to escape – an infertile action, useless, in vain. she knows it is an impossible task and that, as in life, the only end is quitting or failure. a voluntary, contemporary sisyphus. the performance is accompanied by a triptych video in which the artist is voluntarily submitted to physical torture.

KEIJAUN R THOMAS (US) creates live performance and multimedia installations that blur the lines between movement as a visual language and cognitive reasoning in the form of spatial and temporal environments. his interactive and participatory performances investigate normative systems of human ideology. currently a MFA candidate in performance at SCHOOL of the ART INSTITUTE of CHICAGO he earned his BFA for the SCHOOL of VISUAL ARTS in NYC. his performance, THE CHOREOGRAPHED GAZE, is composed of 5 duets (10 people) performing different coupled actions and gestures while sucking on a popsicle. the project aims to explore how we interact with popular objects and societal preconceived imagery and what is deemed acceptable behavior and or social etiquette within the public (societal) sphere as well as self prescribed social etiquette (comfort zones). Also with DAVID ALBERT, PARKER BRIGHT, CHAD CHANEY, STEPHEN KWOK, MAYRA RODRÍGUEZ, PATRICK SEGURA, OLIVE STEFANSKI, KEVIN SPARROW

SUKA OFF (POLAND) is PIOTR WEGRZYNSKI and SYLVIA LAJBIG. they work in visual theatre, performance art, club action, installation, photography, video art and music visuals. SUKA OFF’S work has been presented in theaters, art galleries, clubs and festivals in most EUROPEAN COUNTRIES, as well as in CANADA, USA, ARGENTINA, BRAZIL, CHILE, MEXICO and JAPAN. their work, TRANSFERRA, searches for non-verbal forms of communication between those in an intimate relationship. it is a hybrid work utilizing real-time video and sonic components.

presenters:
QUEER NEW YORK INTERNATIONAL (QNYI) is a performing and visual arts festival that will create a new understanding of queer that will redefine what has become the preconceived, expected and very stereotypic notion of the term as marginalized entertainment and burlesque-type drag aesthetic lacking any artistic relevance. this impoverished reality will be approached by an empowered new concept of queer as a wider platform for excellence in arts, capable of tracking, discovering and interpreting new trends and reinventing queer to be both socially and politically relevant while daring to speak openly about the norms that constitute society and artistic practices. by this redefinition, it will be possible to present artists whose work deals not purely with gender and identities (i.e. expected queer issues), but with different aspects of norms, disabilities, ethnicities and race to name a few.

curators:
ZVONIMIR DOBROVIĆ founder and program director of QUEER ZAGREB FESTIVAL that has been taking place in CROATIA since 2003. the festival grew to be one of the major international events in ZAGREB with a program that has been recognized by the audiences and the media as innovative, progressive and cutting edge. QUEER ZAGREB presented over 150 artists and performing companies from all over the world. in 2009 he created PERFORATIONS FESTIVAL, an informal network of organizations and producers from the BALKANS REGION with the goal to initiate and promote regional cooperation and create local and international opportunities for young and emerging artists. the new commissions and productions are then presented at the annual PERFORATIONS FESTIVAL that takes place in ZAGREB, RIJEKA AND DUBROVNIK, programming more than 20 new works by artists from CENTRAL and EASTERN EUROPE. since 2012 ZVONIMIR also co-directs QUEER NEW YORK INTERNATIONAL ARTS FESTIVAL that he co-founded.

the late ANDRÉ VON AH was originally from SÃO PAULO where he studied philosophy and literature and was a contributor for the MIX BRASIL ‒ THE FESTIVAL OF SEXUAL DIVERSITY in 2006-2007. later he studied art history at the PARIS IV LA SORBONNE UNIVERSITY in PARIS and has collaborated with the QUEER ZAGREB FESTIVAL in CROATIA since 2008. he is currently the artistic co-director of the QUEER NEW YORK INTERNATIONAL ARTS FESTIVAL.

JOSEPH RAVENS is founder and director of DEFIBRILLATOR PERFORMANCE ART GALLERY in CHICAGO, ILLINOIS. he is also founder and director of the RAPID PULSE INTERNATIONAL PERFORMANCE FESTIVAL. for over a decade, RAVENS has been presenting his own work at festivals throughout ASIA, EUROPE, SOUTH AMERICA, and the US. he studied AUDIO-VISUALS at the GERRIT RIETVELD ACADEMIE in AMSTERDAM, NETHERLANDS, and is a GRADUATE of the SCHOOL of the ART INSTITUTE of CHICAGO with a masters of fine art in performance. RAVENS is a recipient of the ILLINOIS ARTS COUNCIL FELLOWSHIP for performance art, and the ILLINOIS ARTS COUNCIL FELLOWSHIP for new performance forms, as well as other grants and awards that have allowed him to build an international reputation. he is recognized and respected for his work as an artist, an educator, and a curator.