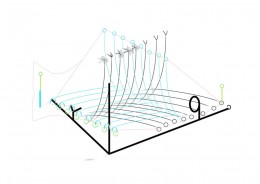 In order for us to apprehend it, information must participate in a form. In the forming of matter into an art-thing, and in the performing of matter within a duration, we create the possibility for information to be sensed. Physical Information brings together artists who prioritize the inquiry into ways that the physical state of a work can be reciprocal with its information.

ARTISTS
MANUEL RODRIGUEZ is an installation artist working primarily with sculpture and assemblages. His projects are concerned with emulating models of technological efficiency as instruments of cultural power. His work has been exhibited in a number of spaces in Puerto Rico and Chicago, such as Peregrineprogram, The Mission, AREA, Espacio 304 and the Museum of Art of Puerto Rico. He received his BFA from Escuela de Artes Plasticas, San Juan PR, and his MFA from the School of the Art institute of Chicago, IL.

FRANK VAN DUERM works intuitively and freely in a variety of strategies.

STEPHEN KWOK is an artist working through installation, digital media, writing, and live performance. He was born in Bartlesville, Oklahoma, was raised in Houston and Hong Kong, obtained a bachelors in Business, worked in Hollywood, moved to New Orleans, founded and directed T-Lot, a studio and exhibition space, obtained an MFA from the School of the Art Institute of Chicago, and is now based in New York.

HEERAN LEE is a performance artist working as a performer and director, whose body centered work explores the private and public gestures of the Asian female body in the patriarchal power structure and investigates into the subject of cultural marginalization. Her recent grants have included the ARKO Young Art Frontier from Arts Council Korea (2013), Semi-finalist prize for emerging artist from The Claire Rosen & Samuel Edes Foundation (2012) and The Anna Louise Raymond Fellowship (2012). Her work has been shown at Culture Station Seoul 284 (Korea 2014), Grace Exhibition Space (New York 2013), The Watermill Center (New York 2012), Defibrillator Gallery (Chicago 2012), and Rockbund Art Museum (Shanghai 2011). She holds an MFA specializing in performance from the School of the Art Institute of Chicago and currently is a fellow artist of LEIMAY 2014-2015 at CAVE in New York.

R W MILLER is a Chicago based artist who works with a variety of output exploring images as a material. He also co-directs Julius Caesar, an artist-run experimental space.

DOM SMITH is an American artist working in digital media, installation, painting and sculpture. He was born in Peoria, Illinois and raised in Muscogee County, Georgia. He obtained an MFA from the School of the Art Institute and is currently based in New York City.

AUDRA WOLOWIEC is an interdisciplinary artist whose work oscillates between sculpture, installation, text and performance, to produce conceptually driven work with an emphasis on sound and the material qualities of language. Her work has been shown and performed at Art in General, Magnan-Metz, Reverse, Socrates Sculpture Park, Norte Maar and The Poetry Project. Featured in Modern Painters, Brooklyn Rail, Time Out NY, LaVague Journal and thresholds (MIT Dept of Architecture). Recent artist residencies include Bemis Center for Contemporary Art and the Physics Department at the University of Oregon. Wolowiec currently teaches at SUNY Purchase and is the 2014-2015 Artist Educator in Residence at Dia:Beacon. She is based in Brooklyn, NY.

JIYOUNG YOON is a New York and Chicago-based artist working in sculptural installation and video. She is interested in games people play in social interactions and transactional behavior. She received her MFA in Sculpture from the School of the Art Institute of Chicago in 2013.