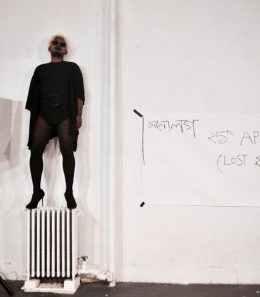 The artists in this performance art exhibition have something in common: they all have been and continue being othered. Placed at the margins of society for not conforming to social norms, they have been and often are classified in somebody’s mind as “not one of us.” There are those who stand out as different no matter where they go. There are those who are othered everywhere.

ALI ASGAR (1991) is a Bangladeshi artist who focuses primarily on body and space as a primary element of their practice. Ali’s work surrounding gender, sexuality, and social taboos often reflects upon their personal struggle with the conservative Bangladeshi attitude towards members of LGBTQ communities. In their work, they use their own body and self-imagery as a rudimentary element to walk the line between reality and the artifice of self-analysis. Ali is now visiting USA as an Artist Protection Fund Fellow in residence at The University of Maine. While in the US,  Ali plans to continue their current projects which are politically inspired and emphasize trauma, dislocation, isolation, body politics and queer identity. With a BFA in Printmaking from the Faculty of Fine Arts from the University of Dhaka, Ali has participated in major group exhibitions including the Dhaka Art Summit in 2016 and 2014, the Kolkata International Performance Festival in 2016, the Dhaka Social Art Festival, (Dhaka Art Center) in 2014 and SEA Juried Art Show (Lislie) in Chicago in 2014, 15 Asian Art Biennale in 2013 among many others. Ali recently completed a solo performance project entitled Shameless at the Edward M. Kennedy Center (EMK) this past year (2016) in Dhaka, Bangladesh.

Join us for an artist talk by exiled Bangladeshi performance artist and gender activist, ALI ASGAR  on MON 06 MARCH at 7PM. Asgar will talk about their past, their practice, and their new reality as an Artist Protection Fund Fellow at The University of Maine. FREE. https://www.facebook.com/events/1717186581912277/

ABEL AZCONA (Pamplona, 1988) is an artist linked especially to processual art by fusing hybrid disciplines such as performance with photography, video art, installation and sculpture with which he explores a work clearly linked to his life experience. His artistic exploration, considered highly autobiographical, investigates themes related to human rights, social injustices, gender issues and various issues such as prostitution, abandonment, abuse and child abuse. It also addresses issues such as feminism, sexuality and pornography, inequalities, politics, terrorism or religion. More than 500 performative projects and more than 100 individual exhibitions at an international level make Abel Azcona a key name in social and political art. His work has been seen in more than forty countries in America, Europe, Africa and Asia. In 2014 the Museum of Contemporary Art of Bogotá dedicated a retrospective exhibition and his hometown, Pamplona another great retrospective exhibition with more than three hundred pieces in the years 2015 and 2016.

JOSEPH RAVENS has presented his work throughout Asia, Europe, South America, and the US. He studied at the Gerrit Rietveld Academie in Amsterdam, Netherlands, and is a graduate of The School of the Art Institute of Chicago with a Masters of Fine Art in Performance. Ravens is a recipient of the Illinois Arts Council Fellowship for Performance Art, the Fellowship for New Performance Forms, and other grants and awards that have allowed him to build an international reputation. Ravens was included in 7a*11d (Toronto 2016); Deformes (Chile 2016); Live Biennale Vancouver (Canada 2015); 20th Bienal Internacional de Curitiba (Brazil 2013); Venice International Performance Art Week (Italy 2012); and Intrude: Art and Life 366 at Zendai MoMA, Shanghai (China 2008). Ravens is founder and director of Defibrillator Gallery, and co-founder and director of Rapid Pulse International Performance Art Festival. He is recognized for his work as an artist, an educator, and a curator.