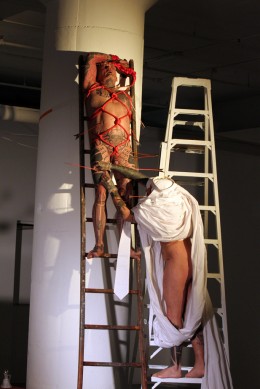 SAT 02.01.14 @ 8PM
located at MANA CONTEMPORARY
2233 S. THROOP STREET CHICAGO
RON ATHEY, JON JOHN and SAGE CHARLES will perform, SEBASTIANE
and JON JOHN will show a work of his own, THE 2 of US

RON ATHEY is an iconic ﬁgure in the development of contemporary art and performance. in his frequently bloody portrayals of life, death, crisis, and fortitude in the time of AIDS, ATHEY calls into question the limits of artistic practice. these limits enable ATHEY to explore key themes including: gender, sexuality, SM and radical sex, queer activism, post-punk and industrial culture, tattooing and body modiﬁcation, ritual, and religion.
visit RON’S blog

MESSIANIC REMAINS is the fourth installation in the INCORRUPTIBLE FLESH series. this work continues ATHEY’S exploration of the continuation of his own post-AIDS body. the first installment, INCORRUPTIBLE FLESH [in progress] was developed as a collaboration in 1996 with the chicago performance legend LAWRENCE STEGER (1961-1999), in residence at the CCA GLASGOW; on the 10 year anniversary of this work, ATHEY launched a 6 hour durational solo, INCORRUPTIBLE FLESH: [dissociative sparkle] at the NRLA GLASGOW, and the following year continued the series with DOMINIC JOHNSON in PERPETUAL WOUND, exploring the myth of PHILOCTETES and NEOPTOLEMUS. between 1996 and 2013, performances also took place in chicago at the BIG GODDESS POW WOW, CANKARJEV DOM, LJUBLIJANA; EUROKAZ, ZAGREB; CHELSEA THEATER, LONDON; THESSALONIKI BIENNIAL; HUMAN RESOURCES, LA; ARTISTS SPACE, NYC; and at the memorials of LEIGH BOWERY in NEW YORK and AMSTERDAM. as in earlier works in the series, ATHEY rides the grandiose myth of enlightenment that only the face of death may reveal. PSi press | LA WEEKLY press.

in SEBASTIANE, ATHEY and JON JOHN are joined by performer/percussionist SAGE CHARLES in taking the image and action of martyrdom to archetypal recovery, as inspired by the religious paintings of ST. IRENE tending to the body of the wounded saint. RON ATHEY has been using the image of ST. SEBASTIAN in his performance work since its inclusion in ending scene of “MARTYRS and SAINTS” in 1992. in 1993, the SEBASTIAN image was revisited in “4 SCENES in a HARSH LIFE”, though transferred onto a butch woman’s body. in 1999/2000’s “SEBASTIAN SUSPENDED” translated the martyrdom as an action incorporating ATHEY’S own body, which continued in later collaborative reworking of the piece with JON JOHN in 2012 for “ST/SEBASTIAN/50”, performed on ATHEY’S 50th birthday.

JON JOHN is a FRENCH artist working with video, photography, installation and most notably performance. JOHN utilizes the body; ﬂesh, skin and blood as a vehicle for expression. his performances are famous for provoking, enlightening and moving its audience. love, life and loss are combined with a veneration of ancient rituals to communicate his everyday life. JON JOHN’S work is based on ritualistic acts, going through various civilizations, cultures, religions, eras and aesthetics. using ancient procedures and rites, merging them with his contemporary vision, JON JOHN shows us something very unique. his performances result in physical live acts mixed with eroticism, mysticism, poetic sensibility and emotions.

in THE 2 of US, JOHN explores themes of love and loss, the resilience of broken heart and our yearning to heal and love again. for JON JOHN the act of love is one of the last surviving ecstatic rituals in our disposable society.

SAGE CHARLES is an artist and musician based in LONDON, ENGLAND. he has performed with ATHEY in “INCORRUPTIBLE FLESH: MESSIANIC REMAINS” at STANFORD UNIVERSITY and HUMAN RESOURCES in CALIFORNIA, and at A.A. BRONSON’S “RITUAL OF QUEER RITUALS” event at WITT DE WITHE GALLERY in ROTTERDAM, NL in 2013.

he has recorded, written and performed as a drummer with various black metal bands for over 7 years. he is a published poet and has performed solo readings across LONDON and LOS ANGELES’ ANTEBELLUM GALLERY. 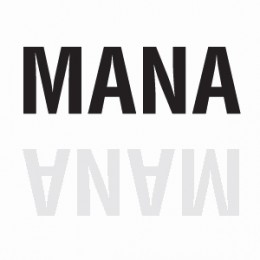 this project is partially supported by THE SCHOOL of the ART INSTITUTE of CHICAGO’S VISITING ARTISTS PROGRAM and DEPARTMENT of PERFORMANCE. additional support by HOOK TORTURE GALLERY. DEFIBRILLATOR is partially supported by grants by the GAYLORD and DOROTHY DONNELLEY FOUNDATION, the ILLINOIS ARTS COUNCIL AGENCY, and CHICAGO DEPARTMENT of CULTURAL AFFAIRS and SPECIAL EVENTS.

advance tickets are strongly recommended and are available by donation at ronathey.eventbrite.com