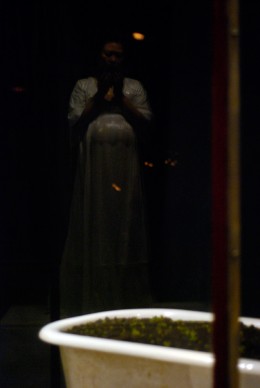 with additional performances by

LYNN LU is a visual artist from SINGAPORE. trained in the US, FRANCE, JAPAN and AUSTRALIA, she currently lives and works in LONDON. LYNN exhibits, performs and lectures extensively throughout ASIA, EUROPE and the AMERICAS. her research looks at the connection between experiential knowledge and the innate human capacity for empathy, in relation to performance art.

image above: the hearing trumpet 2011

with the support of THE NATIONAL ARTS COUNCIL SINGAPORE

HOPE ESSER is a multidisciplinary artist that works in the realms of performance, video, sculpture, and costume. she has a BA in studio art and art history from OBERLIN COLLEGE and an MFA in performance from the SCHOOL of the ART INSTITUTE of CHICAGO. in may she was awarded the TOBY DEVAN LEWIS FELLOWSHIP and the JAMES NELSON RAYMOND FELLOWSHIP from the SCHOOL of the ART INSTITUTE of CHICAGO. she has attended residencies at HAROLD ARTS in CHESTERHILL, OH and OX-BOW in SAUGATUCK, MI, where she was a recipient of the JOAN MITCHELL SCHOLARSHIP. originally from NEW YORK CITY, she currently resides in CHICAGO. she has recently performed at venues such as NEW CAPITAL (CHICAGO) and GRACE EXHIBITION SPACE (BROOKLYN). in addition she has screen videos at BRONX ART SPACE (BRONX) and has exhibited her work at SULLIVAN GALLERIES (CHICAGO), among others. she is currently the public relations assistant for the IN>TIME 2013 PERFORMANCE FESTIVAL (CHICAGO) and has also worked at the VIDEO DATA BANK and the SCHOOL of the ART INSTITUTE of CHICAGO.

KITTY HUFFMAN was born and raised in ROMANIA to HUNGARIAN parents. she moved to the UNITED STATES in her early twenties and received a BA degree from the UNIVERSITY of WISCONSIN, MADISON and an MFA degree from the SCHOOL of the ART INSTITUTE of CHICAGO. HUFFMAN’S work involves video, performance as well as sculptural components to construct large-scale installations at the intersection of performance and the moving image. she has shown work recently at the WATERMILL CENTER (NEW YORK) interdisciplinary laboratory for the arts founded by director ROBERT WILSON; at the MUSEUM of CONTEMPORARY ART in MADISON, WI, AT GRACE EXHIBITION SPACE (BROOKLYN, NY), and at DEFIBRILLATOR and SULLIVAN GALLERIES OF CHICAGO (IL). KITTY HUFFMAN was granted the MERIT SCHOLARSHIP for her graduate studies at the SCHOOL of the ART INSTITUTE of CHICAGO and she is also the recipient of the 2012 ANNA LOUISE RAYMOND FELLOWSHIP (SAIC); the 2010 LYMAN S.V. JUDSON AND ELLEN MACKECHNIE AWARD and the WISCONSIN UNION DIRECTORATE ART COMMITTEE CHOICE AWARD in MADISON, WI. currently HUFFMAN resides in CHICAGO and is working on developing a series of extended self-portraits, which explore ideas about identity and the idea of home sited in the current global culture.