Linda Montano | DAD ART: an INTERACTIVE Performance about LIFE and DEATH and LOVE 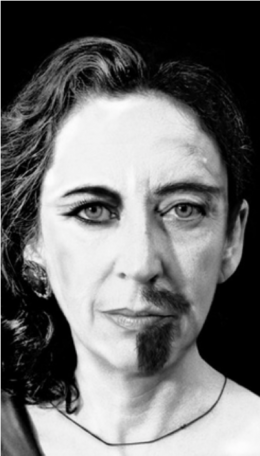 DAD ART: an INTERACTIVE Performance about LIFE and DEATH and LOVE

in collaboration with local artists:

LINDA MARY MONTANO [ http://www.lindamontano.com ] is a seminal figure in contemporary feminist performance art, Linda Montano’s work since the mid 1960s has been critical in the development of video by, for, and about women. Attempting to dissolve the boundaries between art and life, Montano continues to actively explore her art/life through shared experience, role adoption, and intricate life altering ceremonies, some of which last for seven or more years. Her artwork is starkly autobiographical and often concerned with personal and spiritual transformation. Montano’s influence is wide ranging. She has been featured at museums including The New Museum in New York, MOCA San Francisco, and the ICA in London. Montano has taught Performance Art, published five books, and has over fifty free videos on YouTube.

“In 1998 I began collaborating with my father on video: recording our meals, time together, and finally getting to know him. For four years we enjoyed this art-life collaboration. After he had a hemorrhagic stroke, I literally hid behind the video camera because I couldn’t face my Dad’s situation. So for 3 years I recorded it all so I didn’t have to see it…feeding/bathing/walking. I mourned his death with my art family, probably around 2007, at  Pauline Olliveros’ Deep Listening space on Broadway in Kingston and then for some time after that I shared the video-performance, but very rarely because the pain was too raw. But thirteen years later, I am able to re-share this experience because of many things but especially because of music! My parents had a band in the 30’s and 40’s: Dad played drums and trumpet and sang; Mom sang. So when I began focusing on SINGING FOR MY PARENTS AS ART in DAD ART and seriously included my singing in this INTERACTIVE mourning-meditation, the video took on a teaching-tool function and way for me to rise out of debilitating pain and fly toward trance-formation. Also audiences have a chance to interact with over seven other performer-collaborators and deal with death performatively, which opens a door to REALLY being with Impermanence. We all get it: LIFE IS SHORT.  Art makes it spacious and long for a minute. The interactive aspect is what makes DAD ART a communal ART OF HEARTFELTNESS/COMMUNITY. Dedicated to Pauline Oliveros.”

Emily Eddy [emily-eddy.com] is a film, video, and digital media artist and curator based in Chicago, IL. She graduated from The School of the Art Institute of Chicago in 2013, where she received her Bachelors in Fine Arts. Combining many forms of moving image, her work utilizes strategies of video diaries, archival practices, and experimental documentaries. She has been curating film, video, and new media works at the Nightingale Cinema in Chicago since 2013, and she is the programmer of Onion City Experimental Film + Video Festival, a project of Chicago Filmmakers. Emily has shown her work and programmed screenings at many venues in Chicago, as well as her hometown, Portland Oregon, and various cities including Los Angeles, Milwaukee Wisconsin, and Reykjavík Iceland.

Paul Escriva [facebook.com/paul.escriva] began exploring performance art with Frank Moore of Berkeley, California, in the late 1980s.  A creative relationship that lasted over two decades until Moore’s death in 2013. Escriva has been inspired by artists of many disciplines, including Annie Sprinkle, Chilli Pepper, and Linda Montano. He is particularly interested in mobilizing our ever-evolving, aging, and non-normative bodies as a way to investigate the queer body’s overall state of health and/or disease within the community. Escriva has been privileged to serve as midwife to the dying; he has lost forty friends to complications related to HIV/AIDS. For him the boundaries between holistic healer and performance artist are often deliberately blurred as he seeks to create an environment for change. He consistently seeks ways to bridge the practice of art with the practice of everyday living. For all inquiries contact Paul at p.escriva@icloud.com.

Carole McCurdy [carolemccurdy.com] is a Chicago-based artist whose work addresses grief and anxiety, duty and resistance, and the absurd mysteries of embodiment. She has performed at spaces including the Chicago Cultural Center, Epiphany Dance, Links Hall, Hamlin Park, High Concept Laboratories, and Defibrillator Gallery. She received a 2016 Lab Artist award from the Chicago Dancemakers Forum and was a Fall 2016 Sponsored Artist at High Concept Laboratories. She created and directed an ensemble piece, Waver, with support from CDF, HCL, and 3Arts Chicago.

Linda Montano [lindamontano.com + lindamontano.blogspot.com] “It seems  I was born performing according to my Mother and began acting as Chicken Woman in the 70’s. I took all of my issues/problems/traumas/questions/secrets/dissociative personas to the performance world where I showed myself what was happening to me by acting things out!!! That way I could “understand/learn/heal.” Performance Art is my medicine, my drug of choice, my language and I teach it, write about it, and you can find 61 free videos of my thinking on you tube. Free!”

Lauren Pirritano is actively involved in the world of video art through her role as Media Producer at Video Data Bank at the School of the Art Institute of Chicago. Lauren has also worked on a number of video art related projects including her work at Filmform in Stockholm, Sweden, and involvement with Swedish avant-garde magazines OEI and Walden.  Outside the world of video art, Lauren has an active photography practice and enjoys working with visual imagery and sound. She received her MA at the School of the Art Institute in New Arts Journalism.

Joseph Ravens [josephravens.com] studied audiovisuals at the Gerrit Rietveld Academie [Amsterdam, Netherlands] before earning his Masters of Fine Art in Performance from The School of the Art Institute of Chicago. A two-time recipient of the Illinois Arts Council Fellowship along with other grants and awards have allowed Ravens to build an international reputation. He has presented his work in Tempting Failure [London, UK 2018]; 7a*11d [Toronto, Canada 2016]; Bienal DEFORMES [Santiago, Chile 2016]; Live Biennale Vancouver [Canada 2015]; 20th Bienal Internacional de Curitiba [Brazil 2013]; Venice International Performance Art Week [Italy 2012]; and Intrude: Art and Life 366 [Zendai Museum, Shanghai, China 2008]; among others. Ravens is founder and director of Defibrillator Gallery and co-founder and director of Rapid Pulse International Performance Art Festival.

Andy Somma has been performing since the early 1980’s, in his own work and in pieces by Nancy Buchanon, Ellen Fisher, and Karen Finley. He has acted in plays, most recently at the Prop Thtr, as well as MC’ing cabaret shows there. He appears in Paul Carr’s film American Barbarian, currently making the rounds of film festivals internationally. He is honored and grateful to be assisting Linda Montano in this timely performance ritual.

Pamela Strateman is a dancer, performer and film actor. She studied dance with Frances Allis, an early pioneer of modern dance.  Pamela then trained with Carlos Gavito and other masters of Argentine tango, and has danced and taught tango for many years.  Her movement based performances have explored topics such as death, insanity, and the comedy of financial investing.  Her film roles range from feminist author, to post-apocalyptic elder, to heroin addict mom.

Angeliki Tsoli [cargocollective.com/AngelikiChaidoTsoli] is an interdisciplinary visual artist and Fulbright Scholar from Athens, Greece, currently based in Chicago as curatorial assistant for Defibrillator Gallery. She earned her MFA in Studio/Performance at the School of the Art Institute of Chicago. Angeliki graduated with distinction from the department of Fine and Applied Arts, Aristotle university of Thessaloniki. Working predominantly in the field of performance art for a number of years now since studying in Spain with Bartolomé Ferrando, her practice deals with durational, process based and material led concerns and she is interested in exploring these through a visual and mental poetic space, creating and transforming images within a political, identity based and ritual contextual and conceptual approach. Tsoli is co-founder and curator with Francesco Kiais of the performance platform in Athens [MIND THE] G.A.P – Gathering Around Performance.

Zachery Vanes is the Distribution Manager at Video Data Bank, coordinating exhibitions and screenings with national and international arts organizations. He received a BA in Film Studies and English Literature from DePauw University and an MA in Visual and Critical Studies from the School of the Art Institute of Chicago. In the past, he has worked behind the scenes at Kartemquin Films, the Chicago International Film Festival, and the Music Box Theatre. He has presented video art programs at Oberhausen International Short Film Festival and Cairo International Video Festival on behalf of the VDB. He also volunteers as a projectionist for Doc Films at University of Chicago.

Defibrillator Gallery [a.k.a. DFBRL8R] is an international platform for Performance Art. Contextualizing performance in the realm of visual art, DFBRL8R embraces those who look to the body in concert and conversation with time, space, object, nature, architecture, or society. Bold and courageous programming aims to provoke thought and stimulate discourse surrounding underrepresented voices and time-based practices.

Zhou B Art Center is a private non-government funded complex that facilitates the exchange of contemporary art between Chicago and the international art community. Founded in 2004 by the Zhou Brothers in Chicago’s vibrant Bridgeport neighborhood, The Center has a mission to engage in cultural dialogue through contemporary art exhibitions and international programming.