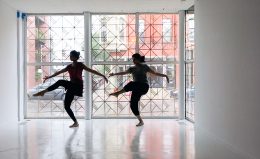 Ishti: Seeking To Be
a dance performance based on the art of accepting and celebrating failure through resilience.

Ishti: Seeking to Be is a dance piece exploring the journey of pushing through failure and using it as a birthplace of creativity, change and innovation. Originally conceptualized by Preeti Veerlapati and debuted as a short piece “Failure” by three friends at the Going Dutch Festival in June 2015, it has evolved to be a full length movement based performance production.

Preeti Veerlapati is trained in Kuchipudi under Smt. Sujata Vinjamuri and Kishore Mosalikanti in St. Louis. She was exposed to contemporary dance through involvement in high school color guard and Indiana University’s African American Dance Company. From 2012-2016, she has been the lead dancer and choreographer at Kalapriya Center for Indian Performing Arts. Her past works include collaborations with Deeply Rooted for Satyagraha, performances at The Field Museum, Chicago Summer Dance, Goodman Theater’s Jungle Book Outreach, Harris Theater, Redmoon Winter Pageant and the Chicago Cultural Center. Preeti is the proud recipient of Chicago DCASE’s Individual Artist Program grant for this project.

Kinnari Vora is a versatile dancer and choreographer in Bharatanatyam (South Indian Classical), Folk and South Asian Contemporary dance styles. She was trained under Guru Sarmishtha Sarkar in India and pursues dance in Chicago under the mentorship of Guru Pranita Jain. She has performed at several prestigious dance festivals in India, Poland, Greece, Israel, Italy. She has performed extensively in New York and Chicagoland area including the Harris Theater, The Art Institute, Chicago Cultural Center, Bloomington Performing Arts Center, Performing Arts, Redmoon Theater.

This project is partially supported by an Individual Artist Program Grant from the City of Chicago Department of Cultural Affairs & Special Events, as well as a grant from the Illinois Arts Council Agency, a state agency through federal funds provided by the National Endowment for the Arts.