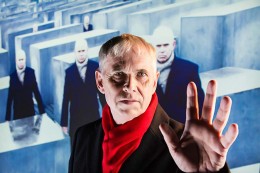 This performance/presentation is also an aspect of RE:MESH.WWWERK/s, curated by jonCates and presented by the Film, Video, New Media and Animation Department at The School of the Art Institute of Chicago: HTTP://REMESH.WORK

T.S. Eliot’s epic poem The Waste Land (1922) is a dazzling and visionary narrative of passion, hope, anger, lust and madness, which is re-imagined for the first time as an experimental multimedia theatre piece. On stage, Dixon recites and begins to ‘relive’ Eliot’s iconic text, while on a giant screen behind him, the poem’s imagery unfolds in a breathless stream of visuals. Meanwhile, Eliot’s bizarre characters – from mysterious clairvoyant Madame Sosostris to a ravishing Cleopatra and a brutal psycho-killer – appear as movie characters on screen, coaxing, seducing, and terrifying the man …

Professor STEVE DIXON is a renowned performer, researcher and the director of The Chameleons Group (since 1994), which produces innovative works for stage and interactive media. He is President of LASALLE College of the Arts, Singapore.