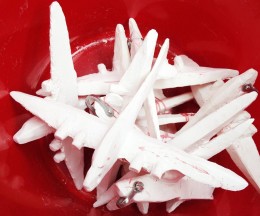 The installation/performance work, SOLUTION, will explore memory and collective guilt through the washing and dissolving of miniature war planes in buckets of red liquid. Working in response to the gallery space, this new version is a development of work shown at the New Zealand Art Festival as part of Performance Arcade 2014. Morgan’s works are durational, intense, site-specific, and often done in collaboration with her partner, novelist and performance artist, Jess Richards.

Sally is an Artist in Residence at The School of the Art Institute of Chicago and her work will be at Sullivan Galleries opening on Friday January 29 with a performance scheduled for Wednesday, February 3, at 4:15pm.

SALLY J MORGAN now a New Zealand citizen, was born in the Welsh mining-town of Abertillery, and has pursued an international career as a conceptual artist specialising in performance and installation. She has presented works across the world in venues such as London’s Institute of Contemporary Art [ICA], Bristol’s Arnolfini, and galleries in Germany, France, Switzerland, Brazil, Japan, Bulgaria and the USA. Her work is held in several collections and she has also been selected to participate in a number of international showcases and biennales over many years. Morgan studied fine art at the Royal Academy of Fine Arts, Antwerp and was later a European Fellow in Fine Art, at Exeter College of Art in England, and the Academy of the Visual Arts [Staedel Schule] in Frankfurt, Germany. She is currently based in New Zealand and has recently shown pieces in the New Zealand International Festival of the Arts in Wellington, and at Te Tuhi Gallery in Auckland, which has been recognised as the leading venue for experimental art practices in New Zealand. Sally J Morgan is a full professor at Massey University in Wellington, and is proud to have been on the faculty of Dartington College of Arts in Devon England at an earlier stage in her career.