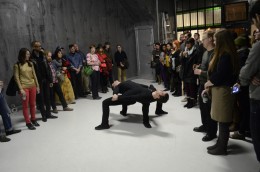 articulating musical convergences and dynamic interactions in a pair of new performances, duos LUCKY DRAGONS (LA) and YOUNGER (CHICAGO) explore the workings of symmetry in different states of imperfection. beginning the night’s program, twins MICHAEL & ALAN FLEMING (BROOKLYN) present a new spatial performance, engaging each other and their immediate surroundings as they create sculptural interventions using their bodies.

HIGH CONCEPT LABORATORIES will have a cultural conversation with MICHAEL and ALAN FLEMING at MANA CONTEMPORARY on SAT 10.26.13 at 12PM on “RELATION, COLLABORATION, and the UNCANNY.”

LUCKY DRAGONS is an ongoing collaboration between LOS ANGELES-based artsists SARAH RARA and LUKE FISCHBECK. active as a band since 2000, they are known for their participatory approach to making music, radically inclusive live shows, and playful, humanistic use of digital tools. FISCHBECK and RARA have presented collaborative work in a wide variety of contexts, including the WHITNEY MUSEUM of AMERICAN ART (as part of the 2008 WHITNEY BIENNIAL), the CENTRE GEORGES POMPIDOU, WALKER ART CENTER in MINNEAPOLIS, LONDON’S INSTITUTE for CONTEMPORARY ART, the KITCHEN in NEW YORK, REDCAT and LACMA in LOS ANGELES, MOCA LOS ANGELES, the 54TH VENICE BIENNALE, and the SMITHSONIAN’S HIRSHORN MUSEUM and SCULPTURE GARDEN, among others. the name “lucky dragons” is borrowed from a fishing vessel that was caught in the fallout from h-bomb tests in the mid-1950′s, an incident which sparked international outcry and gave birth to the worldwide anti-nuclear movement.

YOUNGER is MATT JOYNT and RYAN DANIEL HAMMER. the two began collaborating in 2007 after discovering a mutual interest in attempting forms of risk-taking that produce unhindered presence. early performances with High Places and LUCKY DRAGONS were about the naked terror and ecstasy of showing up without any songs. whatever happened was an attempt to sonically mirror their internal experiences coming together. over the past few years their sets have produced caverns of ricocheting sine waves and improvised mantra-like lyrical meditations. other times they have been beat-heavy, dissonant, far out, and even embarrassing. their LP, NEW MESSAGE—two long-form improvisations, written, recorded and mixed in the summer of 2011—falls somewhere between the worlds of psychedelic drone and pop and is available on POSITIVE BEAT RECORDINGS.

artists MICHAEL & ALAN FLEMING currently live and work in NEW YORK. the FLEMING twins have been working collaboratively since 2005. their work has been exhibited nationally and internationally including shows in CHICAGO, NEW YORK, BERLIN, COPENHAGEN, GLASGOW and RIO DE JANEIRO. they are currently fellows in the AIM (ARTIST in the MARKETPLACE) PROGRAM at the BRONX MUSEUM of the ARTS and INTERNATIONAL ARTISTS in RESIDENCE at the NARS (NEW YORK ART RESIDENCY & STUDIOS) FOUNDATION. as a result of their participation in the AIM PROGRAM their artwork will be exhibited at the BRONX MUSEUM in the summer of 2013 for BRONX CALLING: THE SECOND AIM BIENNIAL. in 2008 their video series “AT REST: THE BODY IN ARCHITECTURE” won the “PERFORMING” section at the KINOLEWCHYK FESTIVAL at the IDEA MUSEUM in LVIV, UKRAINE.

the AVERILL and BERNARD LEVITON A+D GALLERY is part of the ART + DESIGN DEPARTMENT at COLUMBIA COLLEGE CHICAGO. the gallery’s mission is to present professional exhibitions and educational programming that encompasses the broadest possible definition of visual art and design. this is a direct reflection of the pedagogical diversity of the ART + DESIGN DEPARTMENT and the vast array of ideas, media, and techniques explored by artists today. the gallery presents emerging and established artists whose work reflects any of the disciplines taught in the department including FINE ARTS, INTERIOR ARCHITECTURE, ILLUSTRATION, ADVERTISING ART DIRECTION, PRODUCT DESIGN, GRAPHIC DESIGN, and ART HISTORY.

COLUMBIA COLLEGE CHICAGO is an urban institution that offers innovative degree programs in the visual, performing, media and communication arts for more than 10,000 students in 120 undergraduate and graduate programs. an arts and media college committed to a rigorous liberal arts curriculum, COLUMBIA is dedicated to opportunity and excellence in higher education.