I WRITE ON STUFF

…Picasso said he woulda did graffiti if he had the balls.
– Nerd (Chicago’s X Men)

I Write on Stuff is a documentary on the Chicago Graffiti history that was shot from 2001-2004. It was the first film, and brain child of Chicago filmmaker Mark McNess Rosengren. It premiered in the film festival circuit for a short time in 2006. Since then it has found a home on the internet over the last 10 years.

The film went through many stages, including a longer version that has recently been revisited, and re-edited, to create the 10 year anniversary edition adding 23 minutes of original footage.

The film will be screened for the first time in ten years on February 10th at the Defibrillator Gallery 1463 W Chicago Ave in Chicago’s Noble Square neighborhood. 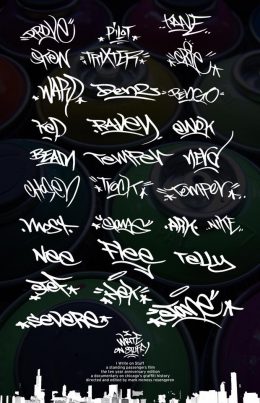 Director Mark McNess Rosengren, shot this film for 4 years while working a full time job. Mark had just obtained a BA in Film from Columbia College Chicago in 2001, and was eager to get the graffiti culture of Chicago documented before it was too late. He felt it was very important to capture the story of Chicago graffiti from the people who made up this diverse culture of outlaw artists because the graffiti scene had been under attack from the city for many years, and it’s presence was withering and with it the future of Chicago graffiti was uncertain.

After completing the primary photography and original edit of the film, a partnership that formed while making the film went very sour. A huge re-edit was forced and a main character was cut from the film. Thus, the released 63 minute version was created.

After a tragic death and a much needed reconciliation, the film was allowed to be re-edited and 4 additional, original characters were added to the film, as well as extended original interviews.

Standing Passengers is looking forward to sharing this piece of Chicago history with the community once more!