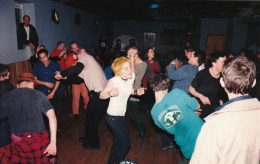 Homocore Chicago and Defibrillator Gallery present…
Homocore Chicago Retrospective
The 25th Anniversary of a Queer Punk Movement
a queer punk retrospective exhibit with performances, videos and artifacts of the 90’s queer and punk scenes in Chicago.

In the 1990’s a group called Homocore Chicago created a regular night that brought queer punks and their friends together in spaces like Czar Bar, The Fireside Bowl and The Empty Bottle to meet, have fun, and listen to a wide variety of live punk music. In celebration of the 25th anniversary of the first Homocore Chicago event, Defibrillator Gallery is presenting a one weekend retrospective exhibition including performances, videos and artifacts from the 90’s queer and punk scenes in Chicago. Artifacts displayed throughout the weekend include posters, newsletters, T Shirts, archival videos, photography and artwork. 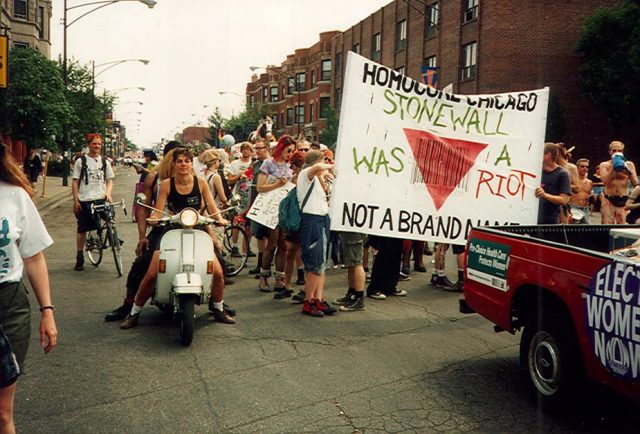 Homocore at the Chicago Pride Parade. “Stonewall was a riot not a brand name.” Mid 90’s. Photo by Mark Freitas.

The Thursday night opening party features a performance by Thalia Zedek, who played Homocore at the Empty Bottle in the early 90’s with Come. Friday night features a set by Homolatte’s Scott Free with Jenny Urban. Scott played numerous Homocore shows through the 90s with this band The Scott Free Trio. Both Performances are at 8PM.

A panel discussing 90’s queer and punk scenes in the Midwest will take place Saturday Afternoon at 2pm and will include trans activist Ed Varga of Homocore Minneapolis, Martin Sorrondeguy of Los Crudos and Limp Wrist, Jane Danger of Three Dollar Bill, Scott Free of the Scott Free Trio; photographer, gallery director and early Homocore volunteer Chris Kellner, and Joanna Brown and Mark Freitas, founders of Homocore Chicago.  The panel will be moderated by Liam Warfield, who is completing book that is a companion the movie Queercore: How to Punk a Revolution.

Biographies of Performers and Panelists

Joanna Brown and Mark Freitas founded Homocore Chicago in 1992 to create a space for like minded queer punks and their friends to meet, organize and have fun. They are honored at awed by the love they’ve received from people whose lives were helped by having this space, and are still amazed that they got the chance to present so many important voices in music.

Chris Kellner is a fetish black and white photographer, founder and director of Hook Torture Gallery, and an early Homocore Chicago Attendee and Volunteer. His Photography is of nude or semi nude punks in black and white shadows.The negatives are often destroyed and degraded to leave an impression of the 1800’s silver plate prints. The prints are displayed larger than life from tree limbs or framed behind spray painted storm windows adding a sullied voyeuristic effect. Chris has exhibited works in Chicago, Detroit, St Louis, New York, Mexico City and Amsterdam. His works have been published in Skin Two, London, Secret Anthology, Brussels, and Lumpin Times, Chicago. Hook Torture Gallery came out of two ideas. One was from the punk DIY openings of Detroit and the other by the urging of Steve Lafreniere of the Milk Factory. A collection of punk artists from Center of Creative Studies in Detroit found a warehouse and for one night turned it into a punk art explosion with unintended stabbings and police helicopters. The Milk Factory in Chicago would play hosts to underground cutting edge artists that was vilified by the Reagan government. It was here that Mark Freitas introduced Chris to Ron Athey. Chris was asked to help before the performance to stain Ron with white cream as Mark fed strands of pearls in his body. The government at this point was slashing the NEA because of the right politicos in which Sen. Jesse Helms riled against Ron who he called Ron Atheist. This was the flash point that Chris created an Art Space strictly for Punks, Freaks and Fetishists. Hooktorture along with the art on the wall hosted punk bands, performance artists and exhibitionists. It was voted be New City(1996) as best place to see body modifications. The Gallery started in 1994 and after a several years hosted its closing with two nights of Ron Athey’s Solar Anus. Since the closing Chris still curates events and currently is on the board of directors of DFBRL8R Gallery. He is most proud of helping to bring Jon John and Ron Athey together through BFBRL8R at Mana Contempary.

Thalia Zedek is a critically acclaimed singer and guitarist best known for her role in the bands Come, Live Skull and Uzi. Her music bridges the space between blues and noise rock. Homocore Chicago was honored to have her play with Come in the 90s and is even more honored now to have her play the opening night of Homocore’s 25th anniversary retrospective exhibition on Thursday November 2nd.

Scott Free was active in the queer punk scene in Chicago in the mid-1990’s. In 1995, he released the queer punk vinyl 45 ‘Garbage Man’, with an accompanying video, which was nominated for a Gay/Lesbian American Music Award. In 1996, he released the full-length CD ‘Getting Off’, which was reviewed in both The Advocate and New City magazines. In November of 1996, the Scott Free Trio performed at Homocore’s 4th Anniversary show at Fireside Bowl, with The Traitors and The Prescriptions. The Scott Free Trio included House Music artist Kajsa on bass, and Liverpool Legend’s Marty Scott on drums. The Scott Free Trio played another Homocore show in 1998, opening for Tribe 8 at the Fireside Bowl. The trio was a frequent performer at Hook Torture Gallery shows, curated by Chris Kellner. In 1999, Scott rearranged Vaginal Creme Davis songs into jazz styles, for her performance at HotHouse, backed by a 5-piece jazz combo. In 2000, Scott started the queer music/spoken word series Grinder (now called Homolatte), which still runs today at Big Chicks/Tweet. Homolatte is the longest-running queer performance series in the country.

Liam Warfield is a writer, musician and educator from Chicago. Queer since birth, he has played in bands and published zines since his early teens, just barely missing Homocore Chicago’s heyday in the mid-90s. He teaches journalism, art and cooking in Chicago Public Schools, and is currently editing a book-length oral history of queercore, largely based on filmmaker Yony Leyser’s extensive interviews with over fifty queer-punk heroes (and anti-heroes)—and due soon! He is thrilled by the invitation to sit and chat with some of the scene’s cutest and most legendary movers & shakers.

Ed Varga is the founder of Homocore Minneapolis and Homo A Go Go. He grew up in Chippewa Falls, WI. He attended college UW Eau U of MN (Minneapolis) and UW Madison. He was a member or the student organization, Progressive Student Network. He graduated from the University of Minnesota in Women’s Studies. While in college he also did an internship and the Lesbian Herstory Archives in Brooklyn, NY. From 1995 to 2000 Homocore Minneapolis produced over 30 events featuring queercore bands and other performers from all over the country at venues such as District 202 (now defunct queer youth center), Red Eye Theater and Seventh Street Entry. Varga, who identifies as a Female-to-Male transgender man, started to transition in 1996. Through his work with Homocore Minneapolis he met the band the Need who asked him to be the live sound engineer in Olympia, WA for their original rock opera that they wrote with Nomy Lamm, The Transfused. After The Transfused, Varga stayed in Olympia and was the live sound engineer for Ladyfest 2000 and Yoyo A Go Go 2001. He also managed Yoyo A Go Go recording studio. In 2002 he founded Homo A Go Go, a queer music, film, art, performance and activism festival. The festival was held in Olympia, WA in 2002, 2004 and 2006 and in San Francisco, CA in 2009. This five day festival showcased the work of hundreds of artists from all over the world including Team Dresch, John Cameron Mitchell, Vaginal Davis, The Gossip, Tribe 8, Bruce La Bruce, The Indigo Girls and many other notable artists. Due to difficulty with funding, the festival is not currently being produced. In 2005, Varga moved to Los Angeles where he worked as a freelance sound engineer and as a community organizer with FTM alliance. In 2009 he moved to San Francisco where he currently lives. He plays drums in the band, The Homobiles, and writes and records music as a solo artist. He also owns the queerest iPhone Repair shop in the world. He lives with his partner, Corrie and their pit bull, Georgia in San Francisco’s Mission District.

Martin Sorrondeguy and his band Los Crudos. In addition Wikipedia notes: Martin Sorrondeguy is the singer of hardcore bands Los Crudos and Limp Wrist, the founder of the DIY record label, Lengua Armada Discos, documentary film director and a prominent figure in both the straight edge scene and the queercore scene. He played many Homcore Chicago shows in the 90’s and currently does vocals in the band Needles.

Jane Danger has been involved in the Chicago queer punk scene since 1994. First as a videographer and fangirl, then becoming more visible and outspoken as a performer and musician. Jane has always used her voice in a humorous, yet thoughtful, way. She co-founded and fronted the long-running mixed-gender queercore band, “Three Dollar Bill” with her gay best friend Chris Piss, in 1996 and they went on to self-produce and release 4 albums over the next 10 years. Many of their songs appear on compilations and independent movie soundtracks. Three Dollar Bill’s final release, “Parody of Pleasure” was nominated for Album of the Year by OUTmusic in 2005. Recently, Jane Danger has played rhythm guitar and provided secondary vocals for the Chicago post-riot grrrl band, “The Cathy Santonies”—a local favorite. Jane also appears in GB Jones’ indie cult film “The Lollipop Generation” (2008) as a hustler and bully. Jane is a carpenter, art installer and inventor who is currently searching for inspiration to start her next new band.

DJ Larissa is a fixture on the Chicago Club Scene spinning at places like Berlin nightclub and was in the audience at some the earliest Homocore shows, most notoriously appearing on stage with Tribe 8. Now she is DJing the final night of what is likely Homocore’s last event ever!