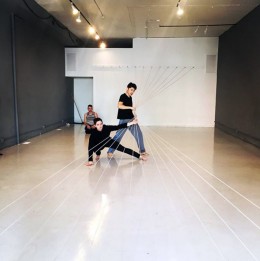 Line of Sighs is a collaboration between Hedwig Dances’ choreographer Victor Alexander and weaver Deborah Valoma. The dance integrates the conceptual, spatial, rhythmic, and sensual dynamics of weaving and dance, triggering a charged zone of corporeality. Line of Sighs builds an arena wherein the metaphors of weaving and dance intermingle, rendering visible the human need for connection.

It’s not often that my immediate reaction to a dance is ‘Hot damn do I want to see that again…’
Zac Whittenburg, Time-Out Chicago

Victor Alexander (Choreographer) is a native of Pinar del Rio, Cuba. His international career as a dancer, teacher and choreographer began with studies in modern and Cuban folkloric dance at the prestigious Escuela Nacional de Arte (ENA) in Havana. He graduated ENA in 1992, the same year he was awarded first place for dance at Havana’s 4th National Union of Writers and Artists. Alexander then joined Danza Contemporánea de Cuba, where he remained a principal dancer until 2002 and established and refined his technique and artistry.

Alexander has studied and working with many distinguished teachers and choreographers including Donald McKayle, Chuck Davis, Jeffrey Bullock , Andrea Miller, Susan Marshall , Johan Inger; and, has performed throughout Europe, Asia, the Caribbean and the United States. Since relocating to Chicago in 2002, Alexander has performed with Hedwig Dances, the Lyric Opera of Chicago, Hubbard Street Dance Chicago, Houston Grand Opera, CDI / Concert Dance Inc. and Luna Negra Dance Theater. He was nominated for an Emmy Award for his dance performance in Billy Sunday by Ruth Page Foundation in 2008.

In 2012, he was selected by the Chicago Dancemakers Forum as one of four choreographers in CDF’s Lab Artists Program, and was included among Dance Magazine’s list of “25 to Watch” internationally for 2013. He received a fellowship from the Illinois Arts Council for his work Line of Sighs, named by the Chicago Tribune as one of the 10 best dance productions of 2013, and was one of the 2013 Novel Affair Artists selected by the Ragdale Curatorial Board. Recently Alexander was selected one of the choreographers for the 1st edition of the Afro-Latina Festival 2014 Among us and received the award from Hubbard Street Dance Chicago International Commissioning Project 2014 for Parting Shadows.

Vin Reed (Costume Designer) A graduate of the University of Cincinnati’s College of Design, Art, Architecture & Planning, Vin Reed is grateful to combine his skills in graphic design, photography, illustration, and fashion in dance partnerships with companies including; Chicago Dancing Festival, DanceWorks Chicago, Hedwig Dances, Piel Morena, Same Planet Different World, and The Visitors. Vin’s work has been featured on the NBC morning show, and in Time Out Chicago. facebook.com/studioVin. This is Vin Reed’s first collaboration with Hedwig Dances.

Deborah Valoma (Set Designer) is an associate professor of Textiles at California College of the Arts (CCA) in Oakland and San Francisco, CA, where she teaches studio classes, graduate seminars, and a four-semester series on the history of textiles. In 1978, Deborah graduated Summa Cum Laude from the University of California at Berkeley with a BA in anthropology, and in 1995 earned a MFA in textiles with High Distinction from CCA. Deborah has dedicated her artistic and academic career to the medium of textiles—to advancing its historical legacy, cultural meanings, and artistic potential. Also a studio artist, Deborah explores the material, historic, conceptual, and poetic nuances of the medium through a hybrid practice incorporating both digital weaving technologies and traditional hand processes. Deborah’s work has been exhibited at galleries and museums, including the de Young Museum, San Francisco; the Los Angeles County Museum of Art; and the Textile Museum, Washington DC. Deborah has also resumed her career in design, producing costumes for several dance companies in the San Francisco area.

Arianna Brame (Composer) is a 2008 graduate of Sarah Lawrence College with a concentration in jazz piano and percussion, as well as history and anthropology. She studied jazz piano with old-school pianist Don Friedman, jazz theory and ensembles with guitarist Glenn Alexander and jazz percussion with the drummer Matt Wilson. During a semester in Havana, Cuba, Arianna studied Cuban percussion at the Instituto Superior de Arte. Arianna has been a percussion and piano accompanist for New York Theater Ballet’s modern dance classes, and regularly plays percussion for belly dance, West African dance and Afro-Beat performance events.