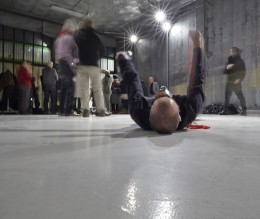 MARCEL SPARMANN (GERMANY) is a live artist born in GERA, GERMANY. he studied theatre and performance art at THE UNIVERSITY of HILDESHEIM and ENVIRONMENTAL ART at GLASGOW SCHOOL of ART. his specific interest reaches across the media spectrums and includes influences from dance, spatial based art, video and installation. this approach has led him to develop a specific understanding for shared spaces and situations which could be seen as ephemeral intersections between political, philosophical and social based questions. he works as a performer and teacher in solo and collaborative projects all over EUROPE. until 2013 he also worked as a teacher and assistant director for PAS | PERFORMANCE ART STUDIES.

LISA STERTZ is a performer and dancer born in COTTBUS, GERMANY. she studied european media studies at the UNIVERSITY OF POTSDAM and the UNIVERSITY OF APPLIED SCIENCES POSTDAM. currently she is a M.F.A. candidate in performance at the SCHOOL OF THE ART INSTITUTE OF CHICAGO. in her work, STERTZ questions the state of the human body in space, seen in the widest sense. with the help of her self-titled approach to her art “VOLUNTARY RESTRAINTS” she aims to direct a focus on either the human body itself or the body in resonance with other bodies, materials and cultures. in more general terms, she seeks to put different ways of perception on display. her work is thus nurtured by solo performances and collaborative works equally. lately she has performed at DOCK11, BERLIN (2014), LINKS HALL, CHICAGO (2013), 6018 NORTH, CHICAGO (2013), SOULKITCHENHALLE, HAMBURG (2013), GRüNTALER9, BERLIN (2011-2013), WITTGENSTEIN HOUSE, VIENNA (2011), HAUTE éCOLE d’Art ET DE DESIGN, GENEVA (2011).

STERTZ’S performance, LEFT OUT, is a critical approach to the notion of ‘capitalism’ and therewith ‘society’ and ‘community’. WALTER BENJAMIN wrote in his fragments that capitalism is a religion without salvation. no hope, but desperation. no salvation, but dept. GIORGIO AGAMBEN picked up this thought and stated is his book PROFANATIONS that we are currently living a shift in value and that in respect to capitalism as religion we would have to “profane the unprofanable”. a capitalistic religion, he says, is about to create an absolute unprofanable, because in difference to christianity, capitalism generalizes the structure of segregation into all possible fields (not only religion). thus we find ourselves in the sphere of consumerism. we are in this world and we function in this world. – LEFT OUT seeks to draw a picture on that constant dual moment of ‘functioning’ and ‘modes of being’ and, thus, questions the state of living.

MARCEL SPARMANN artist statement
I consider myself as a visual artist, experienced in theatre, dance, video art, installation and performance art. that means my understanding and awareness of communication, exchanging and sharing is image and action based. I don’t trust verbal language we are used to control and manipulate, but I like to use the complex construction of language to transform these aspects to artistical expressions. therefore i’m looking for a direct encounter which is open enough to touch a certain subject first on an emotional and then on an abstract or intellectual level. in this sense, performance art is for me the most interesting and challenging art form; because it’s most direct one. it enables to point on something beyond the artist and his ego himself, to a bigger context which could be placed in a political, social or economical understanding.

gestures, sign language and all kind of body based communication are for me the vocabulary i’m researching on. my artistic interest focuses mainly on the creation of intense situations, compressed and intimate spaces which can be then used as a display. i’m looking for a visual and action based language which embodies audience, the aspect of time and non-time and the shared space. especially the space becomes an emotional environment which contains common memory and the navigation in between them.

i’m searching for simplicity of images and actions which carry a pure aesthetic and special temperature, comparable with natural phenomenon which I perceived as a result from a more natural approach.

recently I have been working increasingly with the concept of ‘radicalism’ beside the apparent political or religious context. i’m rather interested in the positive and enervating intersections between objects and actions which can be then called ‘radically’.

for me, the idea of flying is one of the most radical I can imagine. it is a simple gesture or action which constantly contains the potential of change and utopistic moments. flying touches a fundamental dream of human beings. it represents the desire and at the same time the fear to leave the ground, to escape and changes actively the perspective and point of view. the attempt and will to fly is already a radical step in itself. so it creates a state of noticeable density and concentration which draws attention to the inconspicuous. thus provokes change in perspective and absurd intimacy. 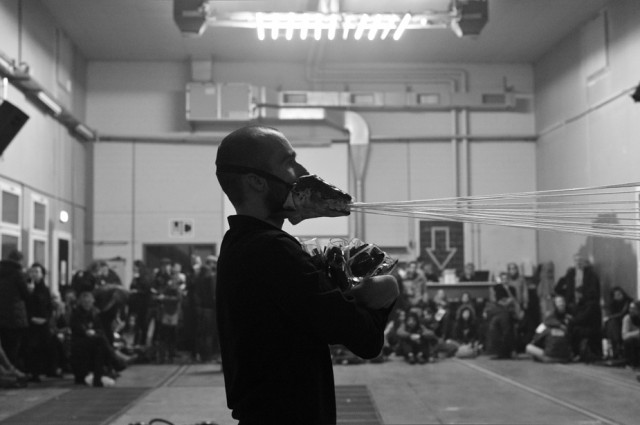 ‘BLACK BOX’ is a new performance series dealing with the idea of a not to deceive memory. a black box or also know as a flight data recorder, is an electronic device used to record critical flight data, and is also able to withstand a crash. in this way, memory is strongly connected to a case of emergency and filled with exclusively ‘real’ data. time and experiences have no influence on these protected facts, and to remember like a black box, means to live in a world filled with all our secrets, sins and not to forgettable impacts on life. 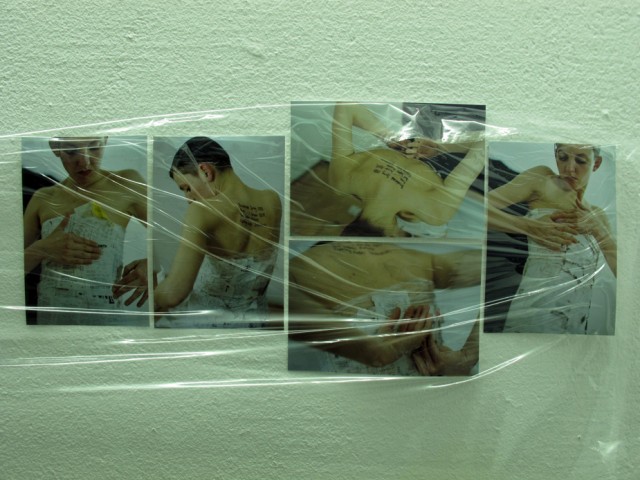