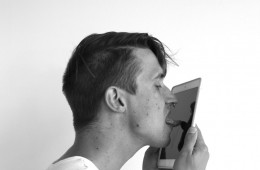 FETISH is a 15 minute performance beginning at 8:15PM – so don’t be late.
the reception will last til 11PM

during his residency, PLOEGER will work on a new performance installation, which will involve an ipad app that responds to licking the screen.

DANI PLOEGER makes performances and installations with consumer technologies and cheap medical devices. he is interested in technologized bodies, ecology, sexuality and vanity. he has tried to fake male orgasms with an anal electrode, had parts of a discarded television sewn into his abdomen, and has programmed an art/porn smartphone app which is available from the MiKandi adult app store. his writing about art and culture has been published in academic journals and books. DANI holds a PhD from the UNIVERSITY of SUSSEX, UK and is currently course leader for performance arts at the ROYAL CENTRAL SCHOOL of SPEECH and DRAMA, UNIVERSITY of LONDON.

from AUGUST 15-23, PLOEGER’S work ASCENDING PERFORMANCE will be installed in the ELECTRODES at DEFIBRILLATOR.

ASCENDING PERFORMANCE features a digitized super 8 film of the naked artist. by slowly making the typical ‘swipe’ gesture over the image on the smartphone screen, the user plays through the frames of the film one by one. through repetitious performance of this gesture, an erection gradually emerges. ASCENDING PERFORMANCE is available from MiKandi, an online store for adult content for android smartphones. the app launch was accompanied by the simultaneous appearance of advertisements for the work in ARTFORUM INTERNATIONAL and on adult website pornhubdotcom.