DFBRL8R on the road 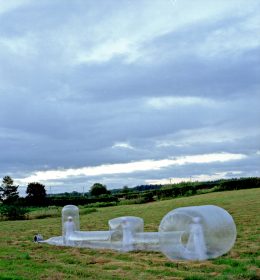 Three artists from Chicago will represent Defibrillator Gallery at the Rosekill Performance Art Festival: Joseph Ravens, Maria Luísa, and Lisa Stertz. The artists will make and share new work at Rosekill ‐ sixty acres of rural landscape in the Hudson Valley, New York. In this beautiful location people come from around the world to make, share, discuss or experience Performance Art. Rosekill is an extension of Grace Exhibition Space Brooklyn).

During their time in New York State, Ravens will present work in a project called, THREAD – A seven week performance series organized by Thomas Albrecht. THREAD investigates the significance of time and process by examining the development of a single work as it changes due to context. Taking place in multiple locations, this project moves between natural environments, public spaces, and institutional frameworks: Rosekill (Rosendale, NY, Friday, June 24), Ann Street Gallery (Newburgh, NY Saturday, June 25), and The Queens Museum (Corona Park, NY, Sunday, June 26). The Queens Museum is dedicated to presenting the highest quality visual arts and educational programming for people in the New York metropolitan area, and particularly for the residents of Queens, a uniquely diverse, ethnic, cultural, and international community. Ann Street Gallery produces exhibitions, events and programs that encourage a greater public understanding and appreciation of contemporary art across cultures and between generations. Earning the distinction of being a four‐time winner of Best Gallery in the Hudson Valley by the readers of the Times Herald Record, Ann Street Gallery is under the umbrella of Safe Harbors of the Hudson, a nonprofit organization that combines supportive housing and the arts.

Joseph Ravens is founder and Director of Defibrillator Gallery, a Performance Art space in Chicago. As an artist, Ravens has presented his work throughout Asia, Europe, South America, and the US. He studied at the Gerrit Rietveld Academie in Amsterdam, Netherlands, and is a graduate of The School of the Art Institute of Chicago with a Masters of Fine Art in Performance. Ravens is a recipient of the Illinois Arts Council Fellowship for Performance Art, the Fellowship for New Performance Forms, and other grants and awards that have allowed him to build an international reputation. Among his accomplishments, Ravens was included in LIVE Performance Art Biennale (Vancouver 2015), the 20th Bienal Internacional de Curitiba (Brazil 2013), Venice International Performance Art Week (Italy 2012), and Intrude: Art and Life 366 at Zendai Museum of Modern Art (Shanghai, China 2008). Co‐founder and Director of the annual Rapid Pulse International Performance Art Festival, Ravens is recognized and respected for his work as an artist, an educator, and a curator.

Lisa Stertz says about her work, “…I aim to direct attention to the human being on a bare, existential level. I reflect the individual in connection to its surroundings informed by society, locality, family, history, and policy. My interests stem from and are targeted towards humanness. I (re)address notions of identity, culture, understanding, acceptance, respect, honesty, reason and gratitude. In other words, my work is exposed to the exploration of different modes of perception to point to an unbiased openness and to alter predetermination. This happens through looking at the physical body with its abilities, the emotional body with its language, and the performing body as a medium. I want to pick people up, invite them to get involved and share my time. Western society views closeness, tenderness, and kindness to be weak, suspicious, and embarrassing, I purposefully seek to create intimate moments of being together, face to face, among others, present ‐ in order to remind us of our natural and mutual longing for an/other.”

Maria Luísa is a Chicago based performance artist dealing with questions of identity and truth. She is interested primarily in creating intimate moments with the spectator through the creation of a universal language ‐ communicated through the human body, water, blood and earth ‐ in order to discuss the ephemeral nature of the social and political truths we use to define ourselves. Her work questions access, freedom, restriction, and the human being in relationship to nature, time, rituals, and empathy. Maria Luisa is inspired by growing up biracial as both first and second generation in the United States. Her primary influence is Ana Mendieta.