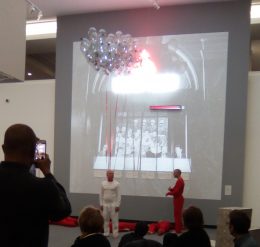 CONDOM CLOUD is a performance art piece created and performed by JOSEPH RAVENS in the early 1990’s. This work captures the artist at a time when he was grappling with his feelings of fear, anger, shame, and loss during the AIDS epidemic. Sculptural costume and poetic text define a protagonist who struggles to survive his own impending annihilation.

Condom Cloud is being re-performed as part of a panel called:
Disruption/Repression: How AIDS Changed America

Medicine, politics, art, activism, sex, culture—everything in the US changed after the first reports of a mysterious illness in 1981. In the face of intense fear, repression, and prejudice, brave activists took to the streets in protest while enduring great loss. Their goal was to create change, and ultimately, find compassion for the suffering and departed.

The panel consists of artists, activists, scholars, and medical professionals who will discuss the social and cultural impact of HIV/AIDS at the height of the crisis, how it relates to today, and how it informs their work. Featuring Dr. Renslow Sherer, Professor of Medicine, University of Chicago; Robert Vazquez-Pacheco, artist and member of Gran Fury; Peter Carpenter, Independent Choreographer and Associate Professor at the Dance Center of Columbia College Chicago; Mary Patten founding member of ACT UP Chicago and Professor in the Film, Video, New Media, and Animation Department at the School of the Art Institute of Chicago; Jeanne Kracher, Executive Director Crossroads Fund; and Stephanie Stebich, Executive Director, Tacoma Art Museum. The panel will be moderated by Lora Branch, long-time Public Health Advocate. Chicago-based Joseph Ravens presents Condom Cloud. Free and open to the public.