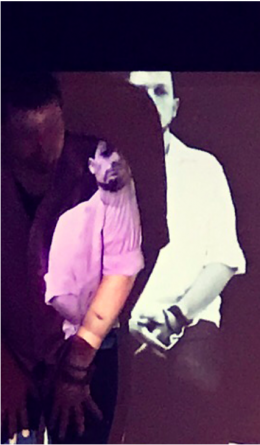 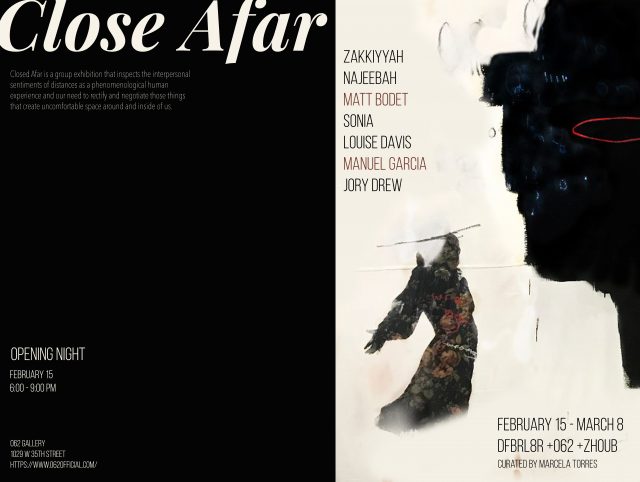 Close Afar is a group exhibition that inspects the interpersonal sentiments of distances as a phenomenological human experience and our need to rectify and negotiate those things that create uncomfortable space around and inside of us.

Matt Bodett [mattbodett.com] received his MFA from Boise State University in 2011, and taught printmaking there until he moved to Chicago in 2013. Since moving to Chicago he has played an active role in disability advocacy and utilizing artwork to open dialogue around mental health. As a visual artist, poet, and performance artist Matt has had opportunities to share his work at many venues throughout the Chicago including Steppenwolf Theater, Victory Gardens, The Poetry Foundation, Intuit: the Center for Intuitive and Outsider Art, Evanston Art Center, Gallery 400, and many other locations. His printmaking has been featured in the 3rd Global Print exhibition and the 9th Douro Biennial in Douro, Portugal, as well as print exhibitions in Tehran, Iran: Milan, Italy; and Oslo, Norway. Matt also teaches at Loyola University Chicago, Northeastern University, and is on the advisory board for the Institute for Therapy Through the Arts based in Evanston, IL. In 2005 Matt was diagnosed with schizoaffective disorder and has utilized the experience of understanding the world anew in his acts of art. Linguistics, psychology, mental health, and phenomenology all play important roles within each act.

Zakkiyyah Najeebah [zakkiyyahnajeebah.com] (b. 1991) is a Chicago based visual artist , educator, and independent curator. Zakkiyyah uses photographic imagery and new media to address the politics and aesthetic values of representation, inclusivity, black womanhood, family histories, and collective narratives. Often her work takes place in the realm of portraiture, documentation, collage, video, mixed media and educating. She is currently building a visual catalog that articulates current and past social concerns regarding black narratives, while also exploring new methods of visual presentation. Zakkiyyah is also a Co-founder of EXPOSURE: a photographically centered mission that prioritizes shared experiences and concerns by photo artists of the Black diaspora.

Manuel Ricardo Garcia [www.beyondcolor.de] is a two-spirit, Native American queer FTM of color. He is a Trans*activist and Photo artist and Author of the book “TransMen of the World”. Manuel was born Munich, Germany, and is currently based there. He has family in Chihuahua Mexico.

Sonia Louise Davis [sonialouisedavis.com] engages improvisation across installation, performance and writing. Born and raised in New York City, she has performed at the Whitney Museum of American Art and published in Women & Performance: a journal of feminist theory. Most recently, she was a New York Community Trust Van Lier Fellow at the International Studio & Curatorial Program in Brooklyn. An honors graduate of Wesleyan University (BA, African American Studies, 2010) and an alumna of the Whitney Independent Study Program (2015-2016), Sonia lives and works in Harlem.

Jory Drew [jorydrew.info] is concerned with the nature of desire and how media, technology, and capitalism shape the romantic notion of love. Drew has studied at the School of the Art Institute of Chicago and has exhibited locally and nationally, he is a Co-founder of F4F, a domestic venue in Little Village (Chicago) and a Co-organizer of Beauty Breaks, an intergenerational beauty and wellness workshop series for black people along the spectrum of femininity.