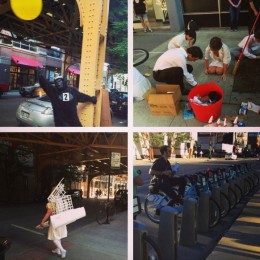 the BRAVE NEW ART WORLD is an arts unification movement dedicated to the service of consciousness occurring the first THURSDAY of every month from 5 – 8PM in the RIVER NORTH GALLERY DISTRICT. DEFIBRILLATOR performance art gallery is curating a series of street performances for this project.

life is a temporary event. as the quality of our lives is based on the quality of our slipping moments, spontaneous art aims to bring strangers together for moments of authentic social connectivity and flashes of creativity. we infiltrate public spaces in costume and create entertaining spectacles that alter routine daily life. bystanders become part of the act and spectators jump in to help shape the direction of our skits. spontaneous art’s performances investigate and depend on the inventiveness of strangers to reach their full potential. after participating with us we hope people are quicker to take social risks, question their self-imposed rules, permit themselves more freedoms and live out their days with more spontaneity.

“LABORATORY PRIMATES”
the technology installed in these gorillas’ minds allows them to understand human language and makes them obey it.
MOBILE PERFORMANCE

JUSTUS HARRIS
JUSTUS HARRIS is a performance artist, tour guide, and writer in CHICAGO working around the body and its relationship to technology and the experience of urban intimacy. over the past four years he has presented work in GERMANY, POLAND, THE CZECH REPUBLIC, and the US. he has created work in the ROGER BROWN STUDY COLLECTION, RANDOLPH STREET GALLERY ARCHIVES, as well as private archives from THE SCHOOL OF THE ART INSTITUTE OF CHICAGO where he graduated with a BA in visual and critical studies.

“DIVVY DETOUR”
utilizing the DIVVY BIKE SHARING STATION on CHICAGO & FRANKLIN, DIVVY DETOUR, will be an evening of rerouting commuters to and from BRAVE NEW ART WORLD and giving them unofficial tours of the district. these conversations will be free form and can last from an hour to a minute depending on the touree. the intersection of tourism, performance, and conversation will converge over the three hours as well as few unexpected happenings. tips will be accepted.
MOBILE PERFORMANCE

THE COLLECTIVE CLEANERS will re-enact the FLUXUS STREET CLEANING EVENT, held in JUNE 1966 at GRAND ARMY PLAZA, NYC.  dressed in white, they go to a select location in the city. an area of a sidewalk is designated for the event. this area of sidewalk is cleaned very thoroughly with various devices not usually used in street cleaning.
MOBILE PERFORMANCE

DANIELA EHEMANN and CARRON LITTLE
photo by JAMIE GANNON
DANIELA EHEMANN studied philosophy and FINE ART at the UNIVERSITY OF ARTS in BERLIN and completed her MFA in FINE ARTS at the UNIVERSITY of ARTS in BERLIN and advanced her working abilities through DEGREE OF THEATRE. she has taught at the UNIVERSITY of FINE ART in BERLIN, worked in cooperation at UNIVERSITY of ART and DESIGN, BURG GIEBICHENSTEIN, HALLE and teaches at a college in BERLIN. she exhibits nationally and internationally since 2012, works with the collaborative RAUM-SELBST and organizes festivals. she reached several support through stipends and institutional support like the CARNEGIE MELLON UNIVERSITÄT PITTSBURGH, the “BERLINER SENAT FÜR WISSENSCHAFT, BILDUNG UND FORSCHUNG” and the LAKE FOREST COLLEGE for the IFA and the GOETHE INSTITUTE. she lives and works in BERLIN.

CARRON LITTLE is a cultural producer in the broadest sense of the word. CARRON is an artist who creates drawings, performance and installation and she is a producer creating opportunities for other artists to be innovative, writing policy to facilitate artists in a fully creative process. LITTLE received a FIRST CLASS HONORS for her undergraduate degree at GOLDSMITHS’ COLLEGE, LONDON UNIVERSITY, UK and her MASTERS from THE SCHOOL of the ART INSTITUTE of CHICAGO. she was artist in resident for the BRITISH ARTS COUNCIL in 2000 and has performed in museums and exhibited extensively since. LITTLE was in the collaborative collective ART NOT WAR for seven years and worked for three years with the performance collective RED VELVET CURTAIN CLUB in LONDON, U.K. and is currently working on collaborative project involving performance and installation with DANIELA EHEMANN in BERLIN. since 2008 CARRON has been performing with the persona of THE QUEEN of LUXURIA devising interactive performances which create transformative experiences for those who participate. she explores concepts of constructed identity and challenges notions of constructed femininity, and systemic notions of hierarchy. her most recent exhibitions include 6018 NORTH (2012/13), SLOW GALLERY (2013), CARTHEGE in WISCONSIN (2013) and THE INSTITUTE OF INFINITE POSSIBILITIES in BERLIN (2013). LITTLE is founder and artistic director of OUT of SITE, CHICAGO public performance series and co-curates exhibitions at EYEPORIUM GALLERY and on invitation. she is frequently invited to give lectures on her own practice and her curatorial projects.

“A HITCHHIKE TO UTOPIA” do not forget your towel! the performance A HITCHHIKE TO UTOPIA is an evolution of the performance entitled CITIES OF A FLOATING WORLD developing a resort of otherness. dealing with the ideas of an “occupied space” in an urban context with specific reference to CHICAGO and BERLIN “occupied” with modernist architecture and forms, this performance will develop a resort for utopian architectural ideas. “FEMALE DRAG QUEEN MOON RACKERS” will work through occurring structures as well as surprising happenings. THE FEMALE DRAG QUEEN MOON RACKERS will perform whilst sitting on two islands and finding a way to adapt new forms of thinking about our cityscapes with the audience.HITCHHIKING TO UTOPIA transports the viewer through experiences of unreal scenes in the middle of urban CHICAGO to create new models for co- existence.  outside PERIMETER GALLERY