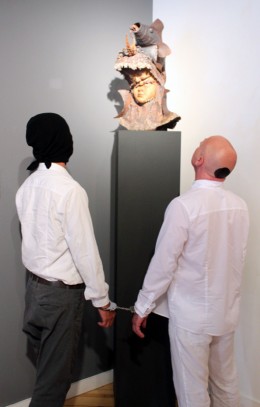 the BRAVE NEW ART WORLD is an arts unification movement dedicated to the service of consciousness occurring the first THURSDAY of every month from 5 – 8PM in the RIVER NORTH GALLERY DISTRICT. DEFIBRILLATOR performance art gallery is curating a series of street performances for this project.

MOTHERGIRL
photo by CARRIE RUCKEL
MOTHERGIRL (US) KATY ALBERT and SOPHIA HAMILTON, is a performance duo living and working in CHICAGO IL their performances have taken the form of installation, durational event, and guided audience interaction. they have performed at MCA CHICAGO FIRST FRIDAYS, ROUGH TRADE II ARTIST EXCHANGE, OUT of SITE, DEﬁBRILLATOR GALLERY, and ROXABOXEN. they are founders and hosts of BITS and PIECES: a MONTHLY SALON for IDEAS and EXPERIMENTS. they recently exhibited their solo show, TWO WOMEN DO THREE THINGS, at HAPPY COLLABORATIONISTS as part of their 2012 ACRE RESIDENCY.

“DON’T SLEEP, THERE’S A WAR GOING ON”
using large feather pillows, each performer beats herself about the head and face. the performance acts as a physical act of frustration–an ambiguous response to the implicit guilt of inaction and the weight of overwhelming knowledge. the lack of clarity serves two purposes, to show the expansiveness of war and to allow all audience to access the image ﬁrst and the meaning second. this was a durational performance that lasted one and a half hours for the 2013 RAPID PULSE INTERNATIONAL PERFORMANCE ART FESTIVAL in CHICAGO IL.

TUAN MAMI (NGUYEN ANH TUAN)
born in HANOI, VIETNAM,  he studied FINE ARTS at HANOI FINE ART UNIVERSITY and has been recognized for his provocative public performances, both within ASIA and EUROPE. he was included in the critically acclaimed exhibition SKYLINE WITH FLYING PEOPLE, the JAPAN FOUNDATION in HANOI (2012). he is a recipient of numerous residencies, including SAN-ART LABORATORY in HO CHI MINH CITY, VIETNAM; HOYOONG PERFORMING ARTS CENTER in SOUTH KOREA; TOKYO WONDER SITE, TOKYO, JAPAN; and the ASIAEUROPE ART CAMP 2010, SHANGHAI, CHINA. he recently participated in number of international art exhibitions, including the PHARMACIDE PROJECT, traveling between LAOS, VIETNAM, CAMBODIA, and FRANCE (2012); A CROSSROADS at the INSTITUTE of CONTEMPORARY ART SINGAPORE (2011); UTOPIA, JAPAN FOUNDATION, HANOI, 2012; CELEBRATION OF OUR MOMENT and FAREWELL PARTY, HALLE 6, MUNICH, 2011; and WHAT IS MOM WAITING FOR?, HOOYONG ART CENTER, SOUTH KOREA, 2011.

CHRISTIAN CRUZ
CHRISTIAN CRUZ is an artist and curator based in CHICAGO. she works as a curatorial director for ROOMS GALLERY in PILSON and has presented performance work there and at DEﬁBRILLATOR GALLERY. she appeared in MARIANNE KIM’S inﬂatable performance for the AIR POCKET PROJECT and curated performances at ROXABOXON EXHIBITIONS.

JOSEPH RAVENS
photo by DERICK SMITH
JOSEPH RAVENS creates time-based art works that embrace the body in relationship to space, object, and society. he completed his undergraduate degree in theater at the UNIVERSITY OF WISCONSIN-WHITEWATER; studied audio/visuals at the GERRIT RIETVELD ACADEMIE in AMSTERDAM, NETHERLANDS; and is a graduate of THE SCHOOL OF THE ART INSTITUTE OF CHICAGO with an MFA in PERFORMANCE ART. over the past decade RAVENS has presented his work throughout ASIA, EUROPE, SOUTH AMERICA, and the US. he is a two time recipient of THE ILLINOIS ARTS COUNCIL FELLOWSHIP, as well as other grants and awards that have allowed him to foster an international reputation. FOUNDER AND DIRECTOR of DEFIBRILLATOR performance art gallery, RAVENS was named a 2012 CHICAGO NEW CITY BREAKOUT ARTIST BY NEW CITY.