1st AMERICAN SHAPIST HOUSE for the PRACTICE of PERFORMANCE/RITUAL 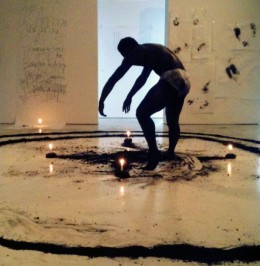 workshop
THURSDAY APRIL 11, 2013 @ 7 – 10PM
PLAY – a physical performance training approach that offers the participant an understanding of the body in action.
$20 advance registration on BROWN PAPER TICKETS / $25 at the door 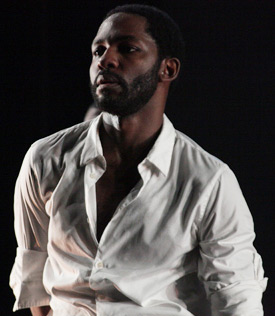 WHITNEY V HUNTER is an interdisciplinary performance artist and independent curator, creating and curating for the stage, gallery, and alternative spaces from CHICAGO, IL. he has received numerous support grants for the creation, exhibition, and performance of his works. WHITNEY holds a BFA in THEATRE ARTS/DANCE from HOWARD UNIVERSITY, an MFA in NEW MEDIA ARTS and PERFORMANCE from LONG ISLAND UNIVERSITY where he is also a professor in the dance program, and commences doctoral studies in philosophy and art theory at INSTITUTE for the DOCTORAL STUDIES in the VISUAL ARTS (spring 2013).

DAVID LAGACCIA graduated in 2008 from FLORIDA ATLANTIC UNIVERSITY with a B.A. in ENGLISH LITERATURE. he has been writing as a journalist since 2004, and he currently lives in BROOKLYN, NEW YORK, where he covers performance art, contemporary dance, and photography. he has been a regular contributor to such publications as WHITEWALL MAGAZINE, HYPERALLERGIC.COM, WILLIAMSBURG GREENPOINT NEWS + ARTS, and soon to be artparasites.com. along with his journalism, he practices performance art, having performed with the ESTONIAN performance art group, NON GRATA at the 2012 MIAMI FOUNTAIN ART FAIR, GRACE EXHIBITION SPACE, and having held performances at PANOPLY PERFORMANCE LABORATORY.

a physical performance training approach which offers the participant an understanding of the body in action. ASKS “how does one hone or become aware of his/her own technical and performance potential?” EXPLORES the body in relation to space and time in an effort to deepen the experience of the moment. EMPLOYS kinesiology, improvisation, and composition as experiential and instructional modalities. PROPOSES the appropriation of social play as a generative method and/or an organic form of performative action. IS a practice in honesty, discovery, and experimentation.